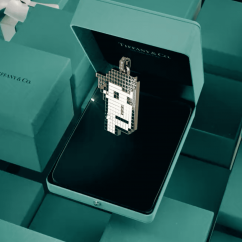 New York, NY--Tiffany & Co. offered CryptoPunks owners a chance to render an NFT of their own with enamel and gemstones that can be worn in the real world. Five days later, the slots were sold out.

The brand announced that it would partner with Chain, a blockchain-based software development company, to release "NFTiff".

The initiative marking the brand's approach to the metaverse was led by Alexandre Arnault, Tiffany’s recently appointed executive VP.

"We’re taking NFTs to the next level," Tiffany & Co. said in a tweet. "Exclusive to CryptoPunks holders, NFTiff transforms your NFT into a bespoke pendant handcrafted by Tiffany & Co. artisans.

"You’ll also receive an additional NFT version of the pendant."

Per the brand, the now sold-out NFTiff was exclusively available to 250 CryptoPunk (NFT collection by Larva Labs) holders in the form of 250 digital assets, which they could use to purchase a unique Punk pendant.

The brand, however, hinted that something similar could take place in the future.

"Until the next mint," it added in the tweet that stated that 250 units were sold out.

Previous article:
Craig’s Fine Jewelry Asks if People Like Their Silver Oxidized; Some Benefits of the Process