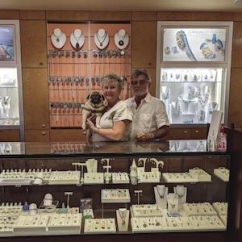 St John, US Virgin Islands—As the clock turned to the new millennium, a Southern California couple decided to take a great leap of faith—3,400 miles’ worth, all the way across the country and well into the Atlantic. 20 years later, they’re successful jewelers being celebrated in the press for their 20th anniversary. The Virgin Islands Daily News recently told their story. Image: Freebird’s owners Barbara and Randy Hervey in store with Pinky the pug. Photo by Andrea Milam for the Virgin Islands Daily News.

Randy and Barbara Hervey, owners of Freebird Creations in St. John, USVI, were ready to trade in a stressful life for something more laid back. Randy worked in the aerospace industry, under the daily specter of a potential layoff. He wanted to buy a business where he would be his own boss. Barbara, meanwhile, had worked in the jewelry industry since childhood, and had a background in both retail and manufacturing and design. She knew someone selling three businesses in the Virgin Islands, one of which was a jewelry store called Freebird Creations.

The couple flew to St. John, spent a week at the store, and the rest, as they say, is history. According to the paper, the couple bought the store, flew back to California to pack up their life there, and six months later returned to St. John for good. The date was November 1, 2000.

20 years later, the Herveys and Freebird are still thriving, although not without some challenges: 9/11 was a mere 10 months after they reopened the store, then 2017 brought a hurricane season that was devastating even by the standards of islanders used to hurricanes, and now the COVID-19 pandemic. During the lockdowns she and her employees cleaned and refreshed every inch of the store, she told the paper. Randy, meanwhile, is semi-retired and handles back-of-house business, while the couple’s pug works as the store mascot and greeter.

The jeweler celebrated its 20thanniversary with a flash sale offering—of course—20% off. 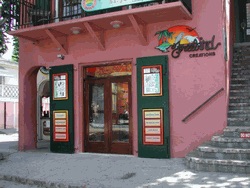 Next article:
FHH Asks: Is The Future Of Luxury Watch Retail Online?