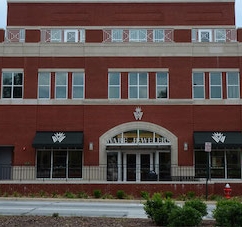 Auburn, AL—While it’s no surprise in the industry that 2020 turned out well for jewelers, it continues to be a topic of interest to local news outlets.

Recently, the Opelika-Auburn News featured Ware Jewelers in a report about doing business during the pandemic. The four-store AGS jeweler, now owned by fourth-generation Ronnie and Tina Ware, is the oldest continually operating jewelry store in the Auburn area, and an important part of Auburn University football game days—including throwing free “Ware eagle” T-shirts off the third-floor balcony of their downtown Auburn store—a ritual they missed somewhat in 2020.

From the article: “We know this couple that comes from Tampa, we know this couple from North Carolina, and we missed getting to see them,” Tina said. “We think of them as friends even though we only see them on game days – but have for the last 30-plus years – so I’ll be glad when things return to somewhat normalcy.”

Ronnie Ware told the paper that despite the challenges of the year, the company had a “tremendous” end to 2020 that brought business back to its normal level. He feels that even with a robust online presence, people still like to come in and see the pieces in person.

Ware Jewelers has longtime ties to Auburn University. The store was founded in 1946 by Lamar Moncrief Ware, the son of an Auburn professor and an Auburn graduate himself. His father advised against becoming a jeweler—there were already five in the area—but his passion overruled his dad’s advice.

In the early days, the store sold much more than jewelry—appliances, china, and even the first color TVs in the area, says the article. Over time, the store both outlasted competitors and ultimately narrowed its focus to upscale jewelry such as David Yurman, Roberto Coin, Henry Daussi, A. Jaffe and more.

Ware is celebrating its 75th anniversary this year and Ronnie and Tina told the paper they have no intention of letting this one slide by!

“We appreciate everyone who chose to shop local in all our locations,” Tina Ware told the paper. “If it wasn’t for them, we wouldn’t be in business.” 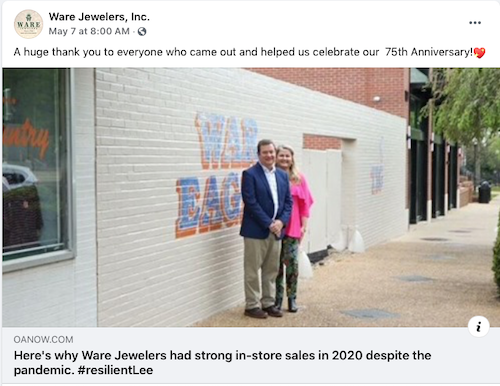