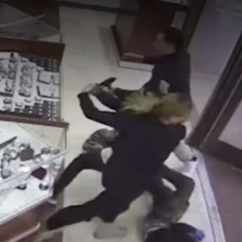 According to a news report, four robbers wearing hoods entered Princess Bride Diamonds and began smashing display cases with hammers. The store's employees — a brother and sister — fought off the intruders by punching and kicking them.

Per the report, a young woman even attacked the intruder with a chair.

This was the first time a robbery attempt took place at the Baca family's jewelry business.

“We had an idea that it could happen, but it’s always different when it actually does happen,” said employee Dallas Baca, as per the report. “At some point, while I was fighting them, one of them actually hit me in the head with a hammer, on the side of my left temple, but I didn’t even register it until after they left because there was so much like adrenaline going on."

Nothing was reported stolen in the incident.

Read more on the incident and watch the video in the entire news report.