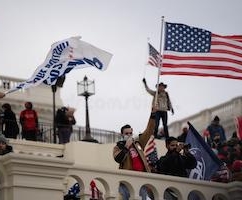 Harrisburg, PA—Few things are more important and valuable to a jeweler (or any business owner) than their reputation. If one of your employees unintentionally puts that reputation at risk by their personal behavior, what do you do?

This issue came to the forefront in a big way in 2017, following the Unite the Right rally in Charlottesville, VA. As photos of the event were posted online, participants were quickly identified on social media, and at least one lost his job as a result. More recently, multiple individuals who were photographed at the January 6 riot at the United States Capitol in Washington, DC were subsequently fired from their jobs and some small businesses also suffered backlash after their owners were identified at the event.

Neither protests nor plain old bad behavior are new. But the ubiquity of smartphones virtually guarantees someone is likely to capture the moment and post those photos or video online. That raises the stakes significantly.

Politics aside, this article in the Central Penn Business Journal  points out the events of January 6 may also have new impact on whether employees can suffer workplace consequences for their off-duty behavior.

Related: Can You Fire An Employee For Their Political Views?

From the CPBJ article:

“Companies may consider their reputations and how employee behavior-especially high profile or newsworthy actions—can add or take away from the corporate name locally and globally,” said Ozias A. Moore, a Lehigh University assistant professor of management.

“The growing demand in our society for corporate social responsibility and how these issues are addressed from a global lens” is increasing, Moore said.

Most states (excepting Montana) have an “at will” employment law, which gives an employer the right to fire any employee at any time for any reason except strictly discriminatory reasons like race, gender, nationality, or pregnancy. But that doesn’t mean the employee can’t turn around and sue for wrongful dismissal, and possibly win. Even if the firing is upheld, such a lawsuit will consume time and resources and possibly bring unwanted publicity to the employer.

Employers and employees both need to understand exactly what the First Amendment right to freedom of speech means. In simple terms, it means that citizens cannot be prosecuted by the government for voicing critical or opposing opinions. But it doesn’t guarantee there won’t be private consequences for their words or actions.

And if the individual works in the private sector, those consequences can include being fired for off-duty behavior that reflects poorly on their employer, unless laws in their state expressly prohibit it. For instance, California, Connecticut, Colorado, Louisiana, New York, and Utah have laws barring employers from firing an employee for engaging in legal political activities on their own time.

Controversial political activity isn’t the only issue that companies have grappled with. Employers also have sought to regulate other off-duty employee behaviors that could potentially impact their bottom line—such as tobacco use or high-risk sports that could drive up insurance costs—and different states have varying laws around those, too.

What can you do to help ensure none of your staff’s behavior gets the wrong kind of publicity for your store or rockets your health insurance costs into the stratosphere?

Your first step should be to consult a labor attorney who is familiar with all the laws of your state and local jurisdiction, and work with them to craft a clear policy. Consider having the attorney attend or lead a meeting to introduce the policy, so that your employees hear it from an objective voice and expert in the law.