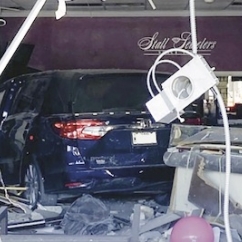 Round Rock, TX—On September 22, Stall Jewelers became the fifth store in the United States to be hit by a car this year. Though thankfully not tragic, the aftermath was worse than prior car/jewelry store incidents, but the jeweler has been able to recover and look back on the situation with humor.

Norma Stall, who owns the 39-year-old company with her husband, Eric, was pinned behind her desk and was rescued by her bench jeweler until first responders arrived. She sustained a black eye and a large cut on her foot, needed stitches on her forehead, and was badly bruised all over.

The store also suffered about $100,000 worth of damage; literally everything was damaged, Stall told KEYE-TV CBS Austin.

"It was like a bomb going off. Everything exploded, powder, sand, jewelry, everything's going all over the place." The store was unable to operate with the damage and had to be closed until renovations were complete, but Stall was confident customers would return once it reopened.

"I know this is a little hardship, but they'll be back. They always come back because they like us," she said.

Indeed she was right. For the store’s recent grand reopening, the Stalls used the incident to create their best-performing ad ever. Designed by industry marketing expert James Porte, the ad shows a photo of the vehicle in the store and jokes, “By the way, we do have outdoor parking.” The ad ran in the Impact, a local free newspaper magazine publication.

“More people have come in on that ad and called. It’s working like a charm,” said Eric Stall.

Porte told The Centurion he and the Stalls are working on developing some social media assets around the ad—a GIF (moving image) for Facebook and Instagram.

Next article:
Show Your Retailers Support this Holiday Season - Part 2