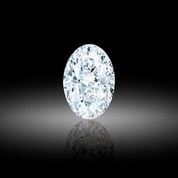 Carlsbad, CA—Empty chairs and silent rooms marked the 2020 auction scene, but the houses had a strong year despite the constraints, and their moves to online will sure ratchet up their competition with luxury retailers this year and beyond. Image: A 102.39-carat D-Flawless oval cut diamond auctioned by Sotheby's.

Both Christie’s and Sotheby’s reported strong demand and prices for the year, with a combined total estimated at around $600 million, but the news from this past Covid year was less about what was sold than how it was sold, which could have an impact through the entire luxury retail market.

In the spring, faced with burgeoning worldwide restrictions on large gatherings, the major auction houses postponed their high jewelry auctions several months until they could expand their virtual and online sales capabilities. The April “Magnificent” (the highest category) sales in Hong Kong, Geneva and New York, were moved to late June and July. In addition, the auction houses diversified a number of high end ($100,000+) lots to other venues such as Paris and London, and reserved a number of others for purely online sales. The result was a more continuous stream of high gems and jewels coming to market than the past, where sales were mostly concentrated into 10 big events each year.

Christie’s reported that its online sales increased 38% by lots, but rose 241% by value, reflecting the move to higher-end gems sold online. Even before Christie’s conducted its first major jewelry auction, it sold a 28.86-ct. D VVS cut corner rectangular diamond for $2.1 million at an online auction in late June its New York venue. That diamond set a price record for an online diamond sale and accounted for half of that event’s volume.

Sotheby’s reported that its online jewelry sales totaled $769.4 million, an eight-fold increase over 2019 and accounted for nearly one-fourth of its total 2020 jewelry revenues of $310.5 million. That total was 8% above 2019 sales.

The auction houses noted that 83% of their lots offered were sold; a good percentage even in less challenging years. Indeed, both houses noted their changes were so successful that they will expand online and live-streaming sales going forward.

Schuler added that the “buy-now” marketplace allows buyers 27/7 access to diamonds and colored stone pieces, as well as other items.

Christie’s reported that it expanded its online jewelry sales to “every major sale site including Paris, Geneva and London to make our digital footprint as global as our auction footprint.” In addition, the auction house added 17 “Curated online Jewels Sales” — special collections of designer pieces and gemstones in an auction format. The company also expanded its charitable auctions division online.

As usual, fancy color diamonds dominated the highlights of the year: 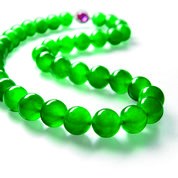 Jadeite bead necklace and a pink diamond were among the top lots sold by major auction houses online last year. 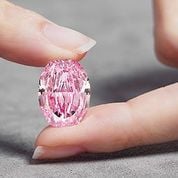 The most controversial sale of the year was Sotheby’s standalone auction of a 102.39 ct D Fl oval cut (top of page) that had been mined by De Beers at its Victor mine, before it closed the Canadian operation. Sotheby’s offered the diamond “without reserve” in October at its Hong Kong venue. Sotheby’s explained it lifted its reserve because “diamonds of this caliber attract interest well beyond the traditional pool of collectors. This innovative sale seems to us the best way to introduce this exceptional diamond to the world in the current circumstances.”

While Sotheby’s noted that, at $15.7 million, it was its second most expensive lot sold in 2020, some dealers believed it was a bargain price, citing a diamond of similar weight, grade and weight that sold for nearly double that price in 2013.

Auction houses have been gearing up their competition with luxury retailers for many years; selling an increasing percentage of newly-cut gems and “made for auction” jewelry pieces, as distinct from estate items. Their actions in response to Covid restrictions — having goods available 365 days of the year— will make them much stronger competitors going forward, especially as these retailers are also moving to an online presence.

Russell Shor is a diamond, gemstone, and jewelry analyst with Roshem Ventures, a global consultancy network of thought leaders, professionals, entrepreneurs, businesses, and stakeholders working together for sustainable social and environmental impact beyond financial return. He has 40+ years of experience in analysis and reporting from major gemstone and diamond production areas around the world, and consulting on international business strategies from production to consumer markets. He has been interviewed by The New York Times, CNN, The Wall Street Journal, Financial Times of London, Bloomberg, Canadian Broadcasting Corp., National Public Radio, New Yorker magazine and numerous other international press organizations and appeared on the History Channel.