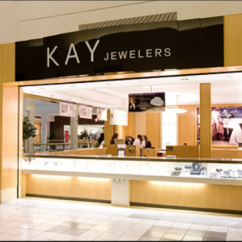 Akron, OH—When Signet acquired Zale, the arch-competitor to its flagship Kay Jewelers brand, some members of the jewelry industry scratched their heads and wondered how that was going to work. Will they just re-brand Zales as Kay stores? Or will they try to make two frankly very (!!) similar middle-market stores somehow not cannibalize each other? Image: the Kay Jewelers King of Prussia Mall store in Pennsylvania.

This article in Forbes offers some insight. CEO Gina Drosos does have a plan—based on what she learned at former employer Procter & Gamble—and yes, you can apply the lessons learned from shampoo brands to jewelry brands.

Certainly Drosos is doing a much better job of creating separate identities for Signet’s various channels than, say, General Motors did in the 1980s, when the carmaker insisted upon competing with itself instead of the increasingly popular Japanese imports like Honda and Toyota. The hood ornament was the only thing differentiating a Chevy from a Buick from a Pontiac from an Oldsmobile and, frankly, even from a Cadillac, as the ill-conceived Cimarron demonstrated.

Drosos gets it in a way that GM’s Roger Smith never did. Signet was and remains a largely middle-market retailer, and unlike GM’s Cimarron, Drosos isn’t trying to make it into something it’s not. But as Forbes contributor Pamela Danziger writes, she recognizes the importance of reaching both up and down from the middle, by nudging the Jared division up into the entry-luxury market with brands like Le Vian, Royal Asscher, and its new custom-design Foundry studio. Conversely, its Piercing Pagoda kiosks introduce inexpensive but real jewelry—fashion, silver, and diamond—to teens or other budget-conscious customers who will someday have money for more expensive jewelry.

Thus we come back to Kay and Zales. Perhaps because Drosos came into the industry from the outside, she quickly saw something many in the industry took a long time to acknowledge: that gifting and self-purchase aren’t mutually exclusive, but they do require different marketing and different product.

I remember speaking at many industry events in the late 1990s and early 2000s, trying to impress the importance of female self-purchase to jewelers. It’s not going to kill your gift business, I said then, but it’s extra money you’re leaving on the table that’s being spent on bags and shoes. When a designer handbag costs more than designer earrings, that’s not small change. And do you really, honestly think no woman ever asks for a designer bag for Christmas or her birthday?

At the time, the reactions I got ranged from enthusiastic “yes!” nods (women), to blank terrified stares (usually men) to outright hostility (always men). More than a few men literally stood up in the audience and told me that jewelry is bought by men for women, period, and I didn’t know what I was talking about. Or maybe that’s the case in their stores because the women who buy jewelry for themselves just went somewhere more welcoming. Of course, now that De Beers and the Natural Diamond Council are pushing fashion and female self-purchase alongside gifting, it’s water under the bridge.

What Drosos is doing—subtly emphasizing gifting at Kay and self-purchase at Zales—proves it can be done. As Danziger writes in Forbes, even if both are carrying similar price points and some of the same brands, they’re picking a different selection of product and presenting them differently to the consumer. It’s not like nobody would ever shop for herself at Kay or buy an engagement ring at Zales, but there’s a definite fashion edge to one and sentimentality edge to the other. The result? Instead of cannibalization, both brands’ sales are up. Roughly 60% of Signet’s Q1 sales for both brands came from new customers.

What’s the lesson for independent jewelers? Simple: you can serve both customers well. Signet banners can and should have very different advertising, but your strategy is more like Tiffany: a consistently recognizable look to all your marketing, but the message and featured product differs depending on the target.

Thankfully, most better jewelers already recognize that. Today, if you mention female self-purchase there are no blank stares and no hostility. Coupled with the more modern approach to emotional resonance that organizations like the Natural Diamond Council are helping to push—not to mention a growing consumer demand for lasting and non-disposable products and pandemic that re-set a lot of people’s priorities—all jewelers, not just Signet banners, are in a good place for growth.

Next article:
Jewelers’ Key to Success: Having a Ball