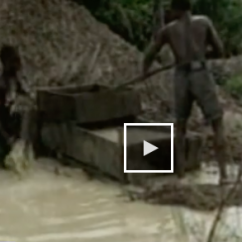 Paris, France—When Pandora recently announced it would only use lab-grown diamonds in its jewelry, industry reaction was swift and not flattering to the company. Not because the brand is going to be using lab-grown stones, but because of its claims that they’re more sustainable than mined. Image: Alluvial diamond diggers featured on an ABC-News report.

Related: Pandora’s Bucks & Lab Grown Diamonds, And What Was So Bad About Its Recent Announcement

Unfortunately, what that entire kerfuffle revealed was not how "bad" Pandora is, but how much work the natural diamond industry still needs to do to grab back the narrative that lab-grown diamonds are somehow a more virtuous, responsible, and eco-friendly choice than mined diamonds.

And this latest report from ABC News proves my point.

Not only because lab-grown diamonds have made their way to Paris’s Place Vendôme, the world’s ground-zero for luxury jewelry, but because even 21 years after the conflict diamond issue broke and the Kimberley Process was put into action and the flow of such stones has been stanched, the industry still can’t shake off the bad reputation and a single report can make it seem like the issue is still prevalent.

ABC News reported that thanks to the Kimberley Process the number has been reduced—factually true—but fails to mention just how low that number actually is. There’s always the “but.”

As an industry, we have to own that some human rights abuses around natural diamonds do still exist, especially in the informal alluvial mining sector. We can’t ignore those. That’s why organizations like the Diamond Development Initiative and others are working to eradicate human rights abuses of any kind and ensure that informal diamond diggers are being treated fairly. But the ABC report only showed informal miners digging in the water—and not one single shot of a responsible, well-run, standard working diamond mine belonging to one of the major mining companies like DeBeers, ALROSA, Dominion, or any others. Those companies are focused not only on responsible practices for their employees and environmental sustainability, but also on giving back to and benefiting the communities in which they operate. 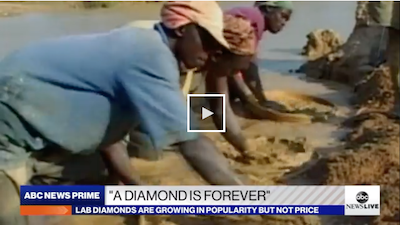 This is how the ABC report portrayed natural diamond mining, above, and below, its statement that the Kimberley Process "reduced" the number of conflict diamonds. 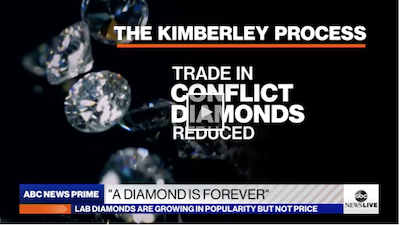 The ABC report did at least interview people in the natural diamond sector, as well as NGOs, who did explain that without the income of diamond mining even those alluvial diggers would be even worse off and far more likely to suffer human rights abuses. But by the time they got to that point in the report, they’d already staked out their position, referred to the Blood Diamond movie and shown clips from it (below), so it didn’t come off quite like a truly balanced report examining all sides of an issue. 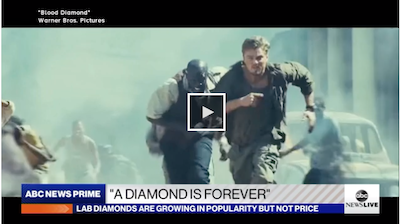 So, back to the lab-grown ecological narrative. The report featured a store called Courbet on Place Vendôme, the first to feature exclusively lab-grown diamonds. Because they’re “ecological luxury.”

Except they’re not. We know it takes a hell of a lot of energy to grow diamonds in a lab. Yes, some companies are solar or wind-powered, and Courbet might be sourcing its stones exclusively from those suppliers, giving it a rightful boast. And Pandora itself claims that 60% of the energy it uses for lab-grown diamonds is renewable now and that will be 100% within a year. But lots (!) of the lab growers are not using renewable energy at all, nor are any of their subcontractors, especially in Asian countries that have lax environmental regulations. And they’re certainly not providing the kind of employment and beneficiation opportunities to the community surrounding the factory that natural diamond miners do.

David Kellie’s latest letter to the industry was optimistic and encouraging about natural diamonds’ outlook, as it should be. The emotional resonance of natural diamonds is real, and has very a long history in its favor. And there's nothing wrong with lab-grown diamonds--which do have a market and bring new people into fine jewelry stores--as long as they're upfront about their processes and real impact on the earth. But the lab-grown sector has done a very good job of seizing the narrative on a popular topic, proving once again that not only can we can never, ever rest on our laurels, we've got a long way to go to grab back the narrative and present an accurate picture.