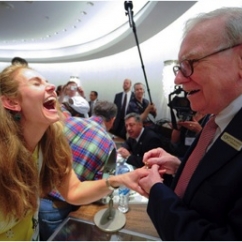 Scottsdale, AZ—The more creative your promotion, the more likely it will generate both buzz and profits. At the Centurion Scottsdale Show’s opening panel discussion, Tom Shay of Profits Plus led a panel of elite retailers—Sean Moore of Borsheims in Omaha, NE, Trish Roberson of Robersons Fine Jewelry in Little Rock, AR; and Mark Veiregg of Walters & Hogsett in Boulder, CO in a discussion of successful retail events. (Left, renowned financier and Berkshire Hathaway CEO Warren Buffett takes a turn behind the sales counter at Borsheims during its annual Berkshire Hathaway Shareholder Weekend event.)

Moore said some of Borsheims’ trunk shows were getting tired but the jeweler still wants to have events to bring in extra product and have people come, so one of the things it did with watch brand Omega was to celebrate the brand’s ties to the James Bond movie franchise. For the three or four most recent James Bond movies, on premiere night the jeweler took its best [watch] customers to the theater. Everyone had popcorn and watched the movie together, said Moore.

“We didn’t sell that many Omegas but it was good engagement with customers,” said Moore.

Another successful event was a partnership with designer jewelry brand Lagos, for his Caviar line, and the cognac brand Hennessy. Hennessy reps brought in some exclusive reserve liquor, tapping into the trend for consumers seeking rare experiences. “We had such great engagement we did the event again. We partnered with Hennessy twice,” said Moore. 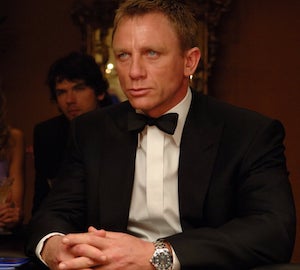 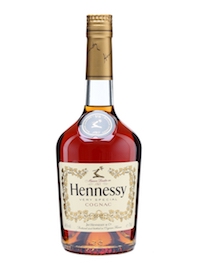 Daniel Craig as James Bond in Casino Royale, wearing an Omega watch, and a bottle of Hennessy cognac.

“How do you get men into the store? They follow women. Get the women in, and men will come,” said Trish Roberson. Roberson is known for her over-the-top events, such as an evening with watch vendors and a guy who rolls cigars.

“We had seating outside the store like a lounge to smoke the cigars.”

Roberson also tapped a friend of hers who trains special-ops law enforcement nearby. Guys like cars and guys like guns, she said, so she took a bunch of men customers out to his facility, where they got to drive some big Hummers and shoot all kinds of guns, including military rifles with night vision.

“I had guys call and say ‘I know you didn’t mean to leave me off that list, and I really want to go.’”

Roberson’s over-the-top experiences include annual trips for high-spending women clients. “I get groups of ladies, anywhere from five to 12, and we travel to LA, New York, Austin, Houston, wherever, to meet the designers. It’s a buying experience and it’s extremely profitable.”

Putting together such a trip takes intense preparation. Roberson starts by going back over her client lists to see who spent what with which designer. She profiles each woman, so that by the time they get to the designer, he or she knows which women like red or white wine, who doesn’t like to be “sold,” et cetera.

She also accounts for all the personal history of each client to make sure she’s not taking two women that don’t get along or who have a conflict on the same trip, such as having dated the same man or being best friends with a second wife when the first wife is on the trip.

“You really get to know your clients and your community and how it’s going to work,” says Roberson. She gathers feedback from each trip to know what worked and what could be improved, and before each trip she takes it first by herself and does a run-through of everything she has planned.

Roberson covers airfare, food, and hotel, but there is a clear expectation that the women will spend on the trip. “Usually [our] expense is around $15,000, but the payoff on the back end more than makes up for it,” she says.

“I’ve gotten thank-you cards from their husbands. One guy called and said, ‘I don’t know if I could ever do this for my wife. She said it was the best trip she’d ever been on.’”

Roberson puts the annual trip in her advertising budget, and she now has staff that plan it separately from regular store operations. “Everybody says word-of-mouth is the best advertising, so yeah, that’s where it belongs.”

At Walters & Hogsett, Vieregg wanted to plant the store’s flag as the destination for diamonds and also for female self-purchase.

“We start with celebrating diamonds as a category in the month of April. It sets us up for Mother’s Day, anniversary season in the summer months, and engagement season. We started talking about everything diamond.” It’s about establishing the category, not a specific event, he says. But events help drive female self-purchase.

10 months of the year, except January and July, the jeweler has something for women going on in-store, such as a “little black dress” party to celebrate jewelry as part of a woman’s wardrobe, or a hashtag party #iamboulder that was a ladies’ night for self-purchase. He’s done Pearls for Girls, Diamonds For Divas, and twice a year does a stacked bands event with Sethi Couture so customers can keep adding to their collections.

“It’s about hospitality, messaging, and segmenting the business. It’s about increasing frequency of purchase. Maybe price points are different than 20 years ago as things are pretty casual now.”

Vieregg also dropped the name ‘fine’ jewelers, and is now just ‘jewelers,’ to get women used to buying jewelry regularly as an accessory instead of just for an occasion and get them more comfortable buying it themselves.

“We’re trying to get others talking about us, get ladies to bring their BFFs and talk about us.”

Borsheims’ biggest and most famous event is the annual Berkshire Hathaway Shareholders weekend in early May. The jeweler hosts a huge tent party in the mall parking lot and essentially takes over the entire area. In 2018, more than 29,000 guests were in the store, along with 25-30 jewelry vendors and five or six gift vendors and 370 staffers working. Borsheims went through 25,000 meatballs, 300 pounds of ranch dip, miles of ribbon wrap, and a sale rang up every 11 seconds, said Moore. 80 news outlets mentioned the event. And of course, there’s always the most coveted sales associate of all: Warren Buffet himself takes a spin behind the counter and is quite good at selling.

Moore says an event like this carries significant risk. “To get 370 people to appropriately represent you to thousands of very wealthy people, you have to provide the experience you want them to get, and you don’t know that’s going to happen. We get through Christmas and the holidays and immediately get ready to host 35,000 people. It’s a well-oiled machine. It’s not something many people can duplicate; we’re just fortunate to have the opportunity.”

The Berkshire event is 15% - 20% of Borsheims’ business, so the hundreds of thousands spent to make it work is worth it, says Moore. But events are not always about revenue, says Moore. “You have to gauge how it keeps customers engaged. But if an event or trunk show is just bad, ditch it.”

“Customer loyalty means so much, and if you can create tribes that talk about you it’s worth it,” added Roberson.