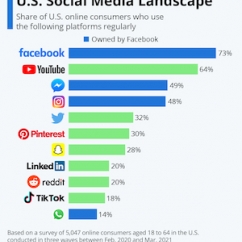 Menlo Park, CA—Wondering which social sites have the most users today and where you should be focusing your efforts? Chart: Statista.com

While there certainly are some up-and-coming sites that jewelers should consider—especially if they’re targeting younger consumers—Facebook is still the proverbial 800-pound gorilla in the social media space. It also owns three of the top four social media sites: its legacy Facebook brand, plus Instagram and Messenger.

After the Federal Trade Commission and 48 state attorneys general brought antitrust complaints against the behemoth site, a U.S. federal court ruled in favor of Facebook, saying the plaintiffs had failed to provide concrete proof that it holds a monopoly or market share in excess of 60%. The court also cited the doctrine of laches, which “precludes relief for those who sleep on their rights”, referring to the plaintiffs waiting eight and six years, respectively, to file a monopoly lawsuit regarding Facebook’s acquisition of Instagram and WhatsApp.

As the chart from Statista.com, based on Statista’s Global Consumer Survey, shows, Facebook does in fact play a dominant role in the U.S. social media landscape—but not enough to be a monopoly. Considering the number of competitors, many of which have hundreds of millions of users themselves, the social media landscape does not look like a classic monopolistic market, however.

Previous article:
Two Diamond Stories Worth Reading And Sharing With Your Sales Staff