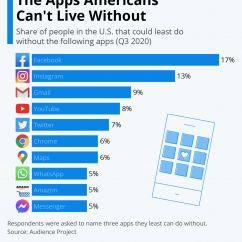 Merrick, NY—Love it or hate it, Facebook is the number-one social media mobile app that Americans say they can’t live without, according to a survey from Audience Project and reported on Statista.com. Image: Statista.com.

Instagram’s app ranked second, followed by Gmail. YouTube came in fourth as a mobile app, showing that for marketers, at least, these remain the Big Three, regardless of device. (YouTube ranked higher in other studies about overall social media use. Figures from Pew Research show it’s the single most popular social media platform overall, outranking even Facebook.)

72% of all Americans use at least one social media platform, according to Pew Research figures from 2019.

The Statista mobile app chart didn’t break out usage statistics by age, although prior studies have shown Instagram is much more popular with younger users than Facebook.

Previous article:
All The Deets On Gwen Stefani’s Engagement Ring For Customers Who Want One Just Like It