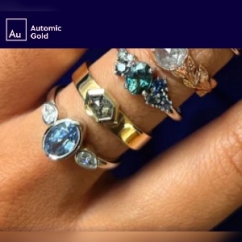 New York, NY--Automic Gold's founder Al Sandrmirova knew their designs were impactful when two women proposed to each other with their engagement rings.

The company, which designs and markets jewelry for the LGBTQ community, isn't more than six years old but has already brought in $4.8 million in revenue in 2022 — more than double of what it did in 2020. And while many small sellers use large platforms like Walmart, Amazon, or eBay to market their products, Automic Gold decided to ditch them and instead start selling products on their own website.

Sandimirova decided to transition to selling products on its website in 2020. This move increased the company's sales by 30%.

"I would rather make less total revenue but have more profits and have more money to pay my employees who are right here in the community," Sandimirova said in the report. "Regular companies assume it's harder to target the LGBT community. They don't understand, and they make such stupid mistakes [because] they don't hire members of the community [or] talk to us."

The company had moments when it was proved that addressing customers' specific expectations worked. For example, many customers started looking for more inclusive brands due to the Black Lives Matter movement in 2020. As noted in the report, Automic gold already had a reputation for prioritizing members of the LGBTQ community, plus-sized models, and people of color.

″[It] skyrocketed my business because people saw,' Oh, you're actually sustainable and fair, not just using [diversity] to sell," Sandimirova said in the report. "I've been doing this for years."

The transition in the industry has been evident for the 33-year-old founder. "I remember when I started my business, it was totally niche," Sandimirova said in the report. "Now, my competitors, who before only had feminine white girls as inspiration, include more masculine folks or plus-sized people. It's nice, in fashion, to see."

Learn more about the brand's journey in the entire report.

Next article:
What This Multimillion Dollar Jewelry Business Uses To Build Connections With Customers