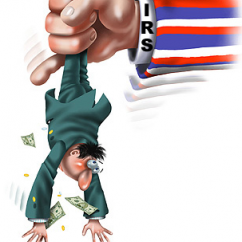 New York, NY—How many Americans are heading to their nearest jewelry store with tax check in hand, ready to spring for that big diamond?

According to the National Retail Federation, it might be fewer than prior years. Data from a February NRF study shows that almost two thirds (65%) of Americans still expected a tax refund, but few of them planned to use that money for a splurge purchase on a luxury item or vacation.

The NRF says the majority of Americans getting refunds plan to put that money into savings, pay down debt, or use it for everyday expenses. The below chart, compiled by Statista.com, shows how Americans plan to allocate their tax refund dollars. 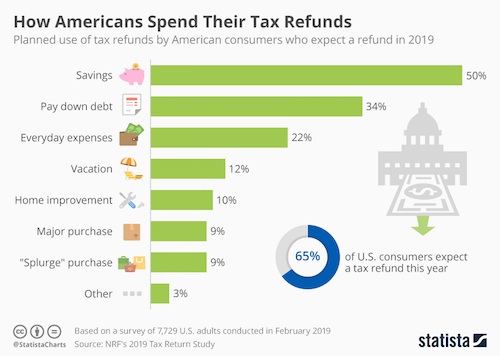 There’s also a good chance that refund will be much smaller than Americans are used to—if they didn’t get a surprise bill instead. IRS data from February 2019 (the latest available) showed the number of refunds down 24.3%, and the average refund down 8.4%.

President Trump’s Tax Cuts and Jobs Act signed into law in December 2017 was intended to boost middle-class workers’ pay under a trickle-down plan that reduced corporate taxes to 21% from 35%. As CBS News reported, the president promised middle-class workers would see their pay increase $4,000 to $9,000 under the plan. But according to CBS, just 6% of companies' tax cut savings are going to their employees; the rest of the increased profits are going to investors.

Even Americans who are paying less in total taxes might not see it in this year’s filing. Because the tax cut bill was signed into law so late in 2017, companies had to scramble at the last minute to try and adjust withholding for 2018 paychecks—and many simply miscalculated. While employees were urged to do a withholding checkup on their own and increase withholding if necessary, many did not. For some, that meant enjoying additional take-home pay in every check throughout the year—but payback came last week in the form of a smaller refund or even a bill for taxes owed.

For luxury jewelers, however, the news might be better: many of the wealthiest Americans saw a nearly 3% increase in after-tax income under the GOP tax plan, according to a Bloomberg report.