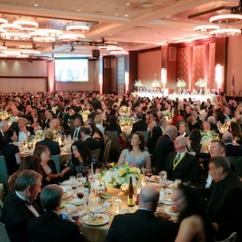 New York, NY—For only the third time in its storied 118-year history, The Twenty-Four Karat Club of the City of New York has canceled its annual Banquet. The 2021 event will not be held due to the ongoing coronavirus pandemic. The January 2020 Banquet at the Sheraton New York Hotel. Photo by Hechler.

“While we are of course incredibly disappointed to cancel the Banquet, the health and safety of both members and guests is paramount. The Club’s board looked at a variety of options, including a scaled-back event, but it was clear that canceling it altogether was the only responsible choice,” said Jeffrey Fischer, Club chairman.

The Twenty-Four Karat Club Banquet, which would have been held January 9, kicks off each New Year for the jewelry industry. Because so many of the industry’s luminaries come to New York for the event, the weekend surrounding the Banquet has grown into a mini-convention of sorts, with multiple industry organizations hosting meetings and celebrations from Thursday evening through Sunday morning.

The Club canceled its signature annual event only twice before: in 1918, due to World War I, and again in 1943, during World War II. Even the 2001 event four months after the 9-11 attacks was held as scheduled, although that year’s festivities were somewhat muted, and Club members voted to forego the evening’s traditional gifts and after-party and donate those monies to benefit the families of victims and first-responders.

The Club’s traditional spring and summer events, including its Summer Celebration and Golf Outing, both were canceled as well—a first for the Club. Fall membership meetings will be held virtually, another first.