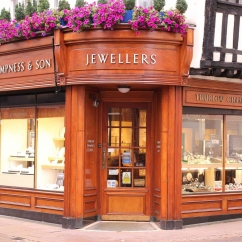 As per a report, Thurlow Champness & Son has been with the same family since 1901, but the shop is said to be 277 years old.

The store's owner, Trevor Salt, told the outlet that the store's closure was sad, but he decided to make the move to find time to "enjoy himself" while he could.

The report added that visitors queued up outside the store for the closing sale since morning. One of the visitors told the outlet that the business was something she'd associated with the town.

"It's always been there - it's just part of Bury and it's sad they're closing but thought we'd come along and see what's on offer," she told the publication.

Someone else recalled purchasing their wedding ring from the store more than 50 years ago.

When Mr. Salt arrived at the store on Saturday morning and noticed a queue, he couldn't help but think of his "well organized" customers.

"We've had a lot of comments, people are quite shocked and surprised and sad," he told the outlet.

Speaking on the store's history to the outlet, he said that his step-father's father set up the business in 1901. Before that, the store belonged to a watchmaker in the mid-18th century.

Mr. Salt said in the report that the closing was sad, but neither of his children wanted to succeed him. Now that he had hit "the big 60," he was looking forward to retiring while still young enough to enjoy himself.

Here's more in the entire report.

Next article:
This Naples Jeweler Is Venturing to Alaska in Search of Gold