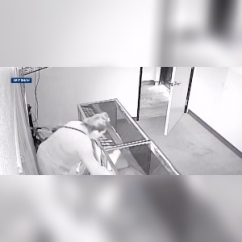 Sacramento, CA--A woman was caught on surveillance camera stealing jewelry worth thousands of dollars from a store.

Owners of Liz Shoes Best & Fitted Outfits said in a news report that a group of four women walked into their store on Arden Way on October 24.

Shop owners Arif Shah — who owns the shop with Amir Siddiqui — said that one of the women in the group distracted him while he was alone at the establishment. Another woman, meanwhile, pretended to try on a dress before forcing herself into a locked room with some more expensive gold jewelry.

Shah claimed that the woman opened the room with a screwdriver. Camera footage from a news outlet confirmed that the woman toom out the items and put them in the bag. Shah estimated the loss to be around $90,000 in the incident, which unfolded in only a few minutes.

The police, per the report, is investigating the matter, which Shah said was a "big shock" due to the nature of the loss.

Siddiqui communicated the news with a warning for other businesses. "You have to be very secure, extra cautious and suspect every single person you see," he noted in the report. "Don't trust nobody if you're in the jewelry, especially the gold and diamond jewelry business."

Next article:
The ‘Love Is Blind’ Natural Diamond Engagement Rings From Season 3