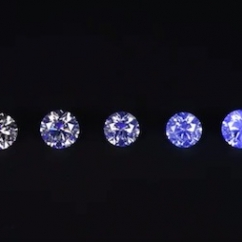 Fluorescence isn’t new, of course, and the industry has mixed opinions about it. But it’s not something that most consumers know about, and Alrosa is looking to turn the characteristic into an intriguing selling feature.

Research conducted by GfK Global among 4017 respondents in the United States and China revealed that once consumers—especially Millennials—learn about fluorescence, they find it an appealing feature: 82% of respondents said they would consider buying a diamond exhibiting fluorescence, and almost 60% are willing to pay as much as 15% more for it, calling the fluorescent glow “unique,” “cool,” and “exciting.” About one quarter of all diamonds feature any fluorescence, but fewer than 3.5% of all diamonds will show medium to strong fluorescence.

Fluorescence is the result of trace amounts of nitrogen. Over 98% of natural diamonds contain minute traces of nitrogen as part of their natural chemical composition. Under certain conditions, the nitrogen atoms form patterns of perfect triangles called N3 centers, which interact with light in a unique way. This results in the fluorescent glow of some diamonds when they are exposed to ultraviolet (UV) rays from sources like the sun, UV lights, and certain fluorescent lamps. Once the light source is removed, the diamond stops fluorescing.

And in most cases, they’ll fluoresce blue, which can cancel out slightly yellowish colors and give the stone a whiter appearance to the naked eye.

“Fluorescence can be seen as a hidden feature of natural diamonds,” says Rebecca Foerster, president of Alrosa USA. 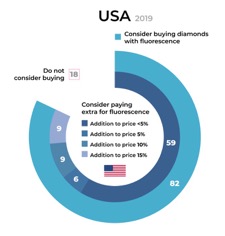 A 2018 study by HRD Antwerp found that the color appearance improvement resulting from fluorescence can be significant in some stones: for example, a J color diamond with very strong fluorescence can appear as high as a G color in daylight. GIA concurs that diamonds with lower color grades (below I) can visually benefit from some fluorescence, but also cautions that fluorescence in higher color grades (D-H) can be less desirable to the trade.

HRD’s study also addressed a common perception that fluorescence adversely impacts clarity, resulting in price discounts from 15% to 35%. GIA says it happens only with very strong blue fluorescence, and the price of stones with a telltale “milky” or “oily” appearance may be negatively impacted. But HRD’s study said that while this does happen occasionally, it applies to relatively few stones and is the result of other causes. In fact, HRD suggests a price premium might be more appropriate than a discount for fluorescence.

They’re not alone in that opinion, but better jewelers and diamond experts caution that a little fluorescence goes a long way.

“Fluorescence is a good thing as long as it is not very strong,” says Canadian diamond cutter Evert Botha of Embee Diamonds. And because it is (so far, anyway), the domain of natural diamonds, that can be an additional selling point.

Bill Nusser of Hands Jewelers, an AGS store in Iowa City, IA, has seen both extremes of industry opinion on fluorescence. Hazy-looking stones are bad—that’s pretty unanimous—but he feels mild to moderate fluorescence is a bonus.

“In my 50 years in the business, the general opinion of fluorescence has alternated between strongly positive and definitely negative. It seems to me that today, people mostly think it’s negative and the pricing of slight to moderate fluorescent stones reflects that. Not too long ago, the premium in colorless diamonds with fluorescence was as much as 15%. Now, it’s practically the opposite.

“At Centurion we bought a group of diamonds that were colorless (D-E-F) with slight fluorescence and they are stunning. And to the shrewd diamond buyer, they are sold at a discount because of the current industry sentiment, and it’s a win-win for all! We do use fluorescence as an asset in our sales presentation, which sometimes requires de-educating and re-educating, but that’s often true about the four C’s too.”

He also remembers that about 40 years ago, one of America’s most venerable luxury jewelers was well known to buy fluorescent stones specifically because the trait makes them appear bluer/whiter.

But to underscore his father’s point, Charlie Nusser, Bill’s son and president of Hands, observed that if you Google diamond fluorescence, most of what you find is negative—which he feels does a disservice to price-sensitive diamond shoppers. The kind of stores where those shoppers typically go teach them that fluorescence is bad, he says.

Laura Stanley, an AGS jeweler in North Little Rock, AR, concurred. Like Nusser, she feels faint fluorescence can help the price of a diamond but “usually when people read about diamonds online, fluorescence is presented as a negative, so it’s just one more hurdle [in the sale],” she says. Like Nusser and Botha, she steers clear of strong fluorescence, but she also has had clients who are especially intrigued by it.

“I had a client once who is a research scientist PhD who bought a large round diamond partly because of its extremely strong blue fluorescence. He thought it was SO COOL!”

You just never know, she said, proving again that every diamond is unique and no matter what the paper says, it’s the client’s visceral reaction to the stone that matters at the counter.