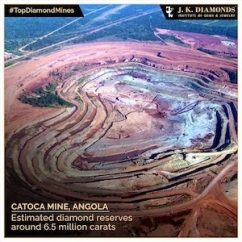 Luanda, Angola—Diamond industry veteran Peter Meeus has been tapped to help establish an Angolan Diamond Bourse (ADB) and build up the nation as a diamond trading hub. Image: Catoca Diamond Mine, Angola's largest.

The new bourse will come under the auspices of Sodiam, the Angolan government’s arm for diamond operations. Meeus, who formerly directed both the HRD in Antwerp and the Dubai Diamond Exchange—where he is considered instrumental in making Dubai one of the world’s major diamond trading centers—is coordinator of the group putting together the plans.

The Angolan Diamond Hub aims to provide a platform to put the country’s flow of diamonds under one roof. Plans include a gemological academy, a technological research center, and for the operation to be established in a free trade zone.

Angola remains a diamond-rich nation, with 14 active mines. Analysts also estimate that only 40% of Angola’s kimberlite deposits so far been discovered and there is high potential for finding others.

It will, however, require a lot more than just an organized central bourse and a well-known name to build the trust of the global diamond trade, following revelations of massive government corruption surrounding Isabel dos Santos, daughter of former Angolan president José Eduardo dos Santos. His daughter, a multi-billionaire, has her finger in pretty much every profitable pie in the nation, including diamonds, oil, and telecomm industries. Her lavish luxury lifestyle—largely paid for with Angolan state funds—stands in sharp contrast to ordinary Angolan citizens who live on less than $2 a day and have some of the poorest health and highest death rates in the world.

Still, the country is trying to stake out a place for itself in a diamond industry focused on both ethics and sustainability, as consumers demand both in their purchases.

“We are very pleased to have an industry leader like Peter Meeus joining us with his wealth of experience. With his expertise, Angola is better positioned to further understand and serve the needs of the diamond trade and to create additional activities on a global scale,” said The Hon. Dr. Diamantino Pedro Azevedo, Angola’s minister of mineral resources and petroleum.

“I look forward to working with the Angolan Government and Sodiam to explore how the Angolan Diamond Bourse can further assist diamond companies worldwide in expanding their activities to the benefit of all,” commented Meeus.