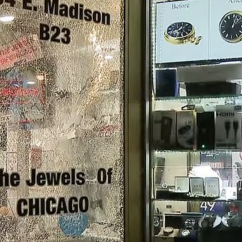 Chicago, IL--A chain-wielding person tried to smash his way into a jewelry store in Chicago recently but was scared off from the robbery by the building's manager.

According to CBS, the incident took place the afternoon of February 25 at The Jewels of Chicago jewelry store on East Madison Street on Jewelers Row.

Footage obtained by CBS revealed that a man in a blue coat with his hood pulled, smashing a glass door with a heavy metal chain. However, the would-be thief was greeted with the cold face of a gun.

“I didn’t get a chance to say anything to him. The moment he saw me come out with my firearm drawn, he quickly ran away,” said Jason Quach, the building manager. “[A]nd I just heard, ‘No, no, no.’”

The robbery's failure was a big relief for the president and owner of The Jewels of Chicago, Qadar Mohammed. “For me, this store is bread and butter,” he told the outlet, adding that it's hard to predict who's coming and "doing what after hours."

The burglar is said to have picked up the heavy metal chain from the construction crew around the corner on Wabash Avenue.

Read the original CBS report on this attempted smash-and-grab robbery in Chicago.