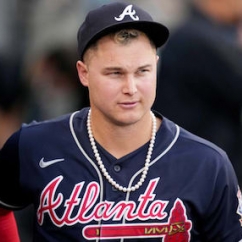 Atlanta, GA—Diamonds on men, especially sports figures, are not uncommon, but a strand of pearls is a pretty unique accessory for a baseball uniform. Image: Kirby Lee, USA Today Sports

Unless you’re Joc Pederson, who’s making news as much for his jewelry as his slugging abilities. The Atlanta Braves’ right fielder has been wearing a strand of pearls since September 29, created by jeweler Gabe Arik of Fullerton, CA-based Happy Jewelers. Arik has made lots of jewelry for famous baseball players, ranging from engagement rings for their fiancées to earrings for themselves. But it’s the first time he’s made a strand of pearls for a man.

Happy Jewelers is a second-generation store run by brothers Gabe and Danny Arik. Their father, Isa Arik, was a sought-after jeweler in his native Turkey before emigrating to the United States in 1993. He settled in Los Angeles, where he opened a modest manufacturing facility in the Los Angeles Jewelry Mart. Gabe and Danny co-founded Happy Jewelers practically out of high school, growing it into a high-end store that specializes in diamonds, bridal jewelry, custom design, and luxury watches, and counts several high-profile sports figures and music celebrities among its clientele.

Related: Happy Jewelers Featured By Two Publications In One Week

How did a baseball player in Atlanta come to shop at an independent jeweler in Orange County, CA?

Easy. Pederson played for the Los Angeles Dodgers for seven years, and met the jeweler through a teammate. Happy Jewelers counts at least a half dozen, if not more, present and former Dodgers among its clientele. Pederson left the Dodgers at the end of the 2020 season, but stuck with the jeweler he trusts. He started the 2021 season with the Chicago Cubs, and was traded to the Braves in July. 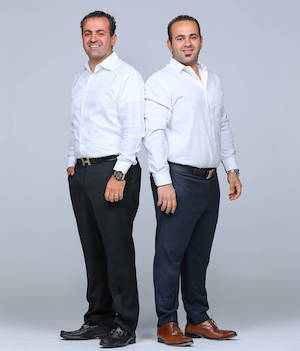 So why pearls? Pederson has no deep backstory, other than that it’s something different. Sports Illustrated reports the 24” cultured pearl strand is comprised of 14 mm white pearls with a lobster clasp, and Happy Jewelers also made three backup strands in case of mishap.

Good thinking. Pederson’s necklace broke during Game 3 of the World Series on October 29, necessitating an immediate replacement. As any good luxury jeweler would do for a top customer, Arik hopped on a plane to deliver the replacement in person, much to the relief of Braves fans, who superstitiously feared the team’s mojo might be lost if Pederson played without them. Luckily, Pederson got his pearls in time and the Braves won Game 4 by a score of 2-0 over the Houston Astros on October 30, bringing the team to a 3-1 lead in the Series.

Not surprisingly, Atlanta fans are following suit: both men and women in the stands are now sporting pearl necklaces. Though the Braves lost 9-5 to the Houston Astros on Sunday, October 31, reducing their World Series game lead to 3-2, at press time the Braves still remained one win away from their first World Series championship since 1995. Update: The Braves won the 2021 World Series in Game Six on November 2, with a 7-0 win over the Astros.

Happy Jewelers, meanwhile, is getting lots of business from Pederson’s unusual accessory. Arik told Sports Illustrated that while major-league ballplayers don’t want to look like they’re copying Pederson, younger ballplayers are going for it. From the article: “A month ago, Arik had never had a man buy a pearl necklace for himself. Since Pederson began his pearl jam, Happy Jewelers can’t fill orders for men fast enough.”