Merrick, NY—By now you’ve surely heard of blockchain and Bitcoin, along with predictions that one or both will, if not revolutionize, at least impact the fine jewelry industry. (Image at left: Enterprise Blockchain)

But realistically, will either one ever impact you personally?

AARP explains both with a bit of humor and a dose of caution, defining Bitcoin as “a bunch of computer code that a bunch of criminals, idealists and speculators agree is worth “real” money. Sadly, its real-money value swings widely, making it impractical except for criminals, idealists and speculators.” AARP’s definition of blockchain is: “1. A different bunch of computer code containing an unalterable record of a series of transactions. The most famous is a digital ledger recording all bitcoin transfers. 2. A word often uttered by companies hoping to snare investors’ attention — and dollars.”

Why would you ever want either one?

Because they do have worthwhile uses, and eventually you may have no choice. In a series of two articles, The Centurion explains how each eventually will impact even small independent jewelers.

Blockchain has valid applications for the gem and jewelry market in tracking origin and ensuring an ethical supply chain. It was the focus of a panel discussion during the recent CIBJO Congress in Bogotá, Colombia. At some point, all gemstones, diamonds, and other elements of the jewelry supply chain may be tracked automatically by blockchain.

At CIBJO, panel moderator Erik Jens introduced the session by asking, “Is it just a new buzzword or will it really bring large benefits to the jewelry industry supply chain?” Like other disruptive technologies before it, while there is much excitement at the potential to revolutionize the industry, people are still not clear on how it works or how to use it, he said.

Key to blockchain is, as AARP says, “an unalterable record of transactions.” Data is transferred through a decentralized online platform, which makes it practically unhackable, says CIBJO panelist Eli Avidar, president of Carats.io, a diamond-backed cryptocurrency. 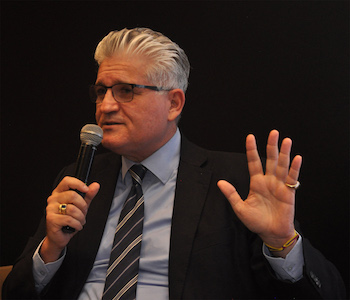 Eli Avidar during the CIBJO presentation

Although as AARP says, blockchain is most often associated with Bitcoin and other cryptocurrencies, the technologies are independent. Blockchain is a tracking ledger, whereas cryptocurrency is essentially a monetary system made up of a finite number of digital units, explains Avidar. In principle, they can be issued by anyone, he says, but they will become a trusted legal means of tender only when a sufficiently large number of people buy into the premise that they have value. Blockchain technology tracks the transfer of cryptocurrency funds, among other things.

In an exclusive interview with The Centurion, Avidar explains blockchain as a public accounting ledger that records the movement of data from one account to another, in multiple copies in a network of computers. Every time a new a transaction is added to the ledger, the computers check to make sure the transaction is valid. Each transaction (i.e. block) has its own unique cryptographic fingerprint, and the computer nodes in the network agree on a shared history before allowing more transactions to take place.

“If I am holding two digital tokens in an electronic wallet, I am effectively a block in the chain. When I transfer one of those two tokens to you, a public record of the transaction is recorded, meaning that I cannot claim that it did not take place. It is demonstrably evident that I have only one token left in my electronic wallet,” says Avidar.

The transaction is transparent, allowing everyone who might later acquire the token to look back along the chain and see the record of its transfers. Because the chain has a diffuse structure—not under the control of a central authority—and cannot be altered after the fact, and has a system of encryption that Avidar calls “virtually impossible to crack,” it’s as secure as it possibly can be.

When it comes to non-financial transaction data, like diamonds, blockchain also allows additional information, such as grading reports, Kimberley Process certificates, and more to be attached to the block, which will identify and verify the integrity of the stone as it passes down the chain of distribution, Avidar told The Centurion.

Carrie George, vice president of sustainability solutions for London-based Everledger, a blockchain company that has developed traceable supply chains for the diamond, gem, and jewelry sectors, told CIBJO attendees that blockchain will become like the Internet or cell phones: a technology we take for granted and don’t need to ask what it is. 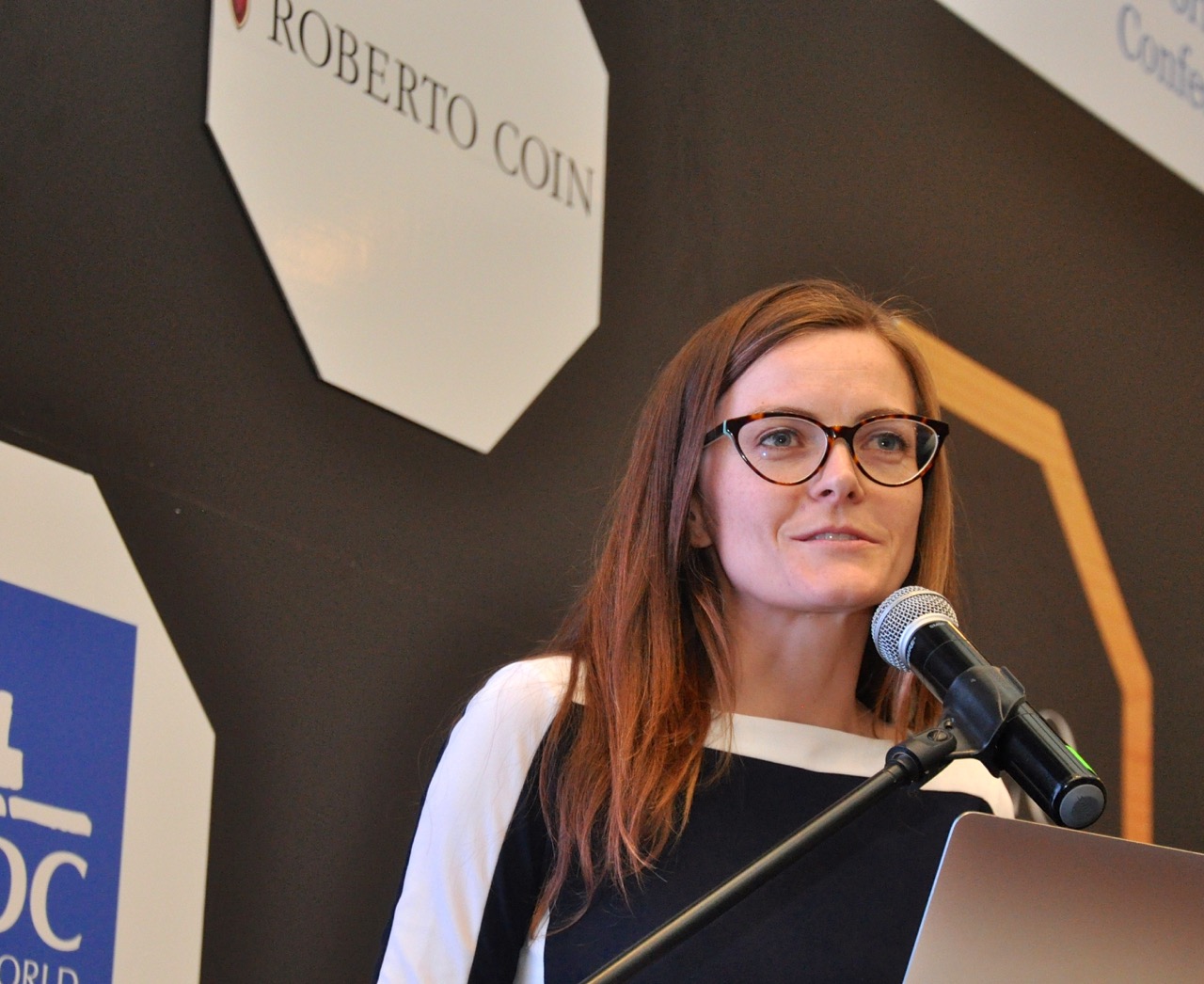 Carrie George gives the keynote address during the CIBJO panel on blockchain.

“Blockchain can be used for small-scale miners, allowing for legitimate market inclusion. We can simplify documentation and improve retailer and consumer confidence,” she said.

Helzberg already is testing out blockchain technology. The retailer is working with TrustChain, another blockchain company that’s a collaboration between business tech giant IBM and a consortium of gold and diamond leaders. It’s currently tracking sales of about six styles of gold and diamond engagement rings and may be available in selected stores by the end of this year.

“Consumers want to know what they’re getting and where it’s coming from,” Helzberg executive Julia Yoakum told Retail Customer Experience.

Blockchain has value for trade shows, said Corrado Facco of the Vicenza jewelry fairs, also a CIBJO official. Digital wallets can enable tradeshow participants to pay digitally within a safe environment. Instead of waiting for bank compliance officers to verify each monetary transaction individually, blockchain creates a digital identity and a verifiable record of ethical integrity of tradeshow participants.

In addition to guaranteeing ethically-mined diamonds and gems, blockchain also has substantial implications for combating counterfeit products, including luxury goods. An article in Forbes says on-demand manufacturing allows machines that make a particular product to be activated by a blockchain network only when there’s an order for the product, and automatically locked once a specified number of units of a product are made.

But as Forbes points out, supply is only half the equation. Demand is the other half. Counterfeit goods wouldn’t exist if people weren’t willing to buy them. Counterfeiters may argue they’re just supplying a demand and, as author Samantha Radocchia points out, they are--especially when it comes to luxury goods. Consumers who can’t shell out $2,000 for a designer handbag (or $20,000 for a watch) may spend $300 on a high-quality replica. They know they’re buying a fake, and they’re okay with that, she writes.

People need more than just knowledge of where a product comes from, they need that information to be meaningful, maintains Radocchia. She says people need a strong emotional connection to change their behavior. But for most luxury goods, that connection doesn’t exist. Counterfeit medication or beauty products truly can be harmful, but counterfeit jeans, while perhaps ill-fitting, aren’t lethal, she says. Likewise, a counterfeit Rolex might make you late for dinner but it's also unlikely to kill you.

Radocchia nailed the emotional factor. Images of children with chopped-off limbs forever changed consumers’ perception of diamonds. Almost 20 years after the conflict diamond images first surfaced, consumers still ask or believe it's still happening, proving it made an emotional connection with staying power. Compare that to images of sweatshop labor creating faux luxury goods: those either lack awareness or aren’t horrific enough to matter. Nor have dire warnings that fakes fund terrorism. It’s not that consumers want to fund terrorism, but until there’s a proven direct link, it’s not likely to forge a strong enough emotional reaction to discourage them from buying.

But because the images of conflict diamonds are seared into consumers' minds, blockchain will allow jewelers to confidently reassure them--even beyond the scope of existing Kimberley certificates--that the piece they're buying is ethically sourced.

For now, blockchain technology is the closest thing there is to an iron-clad guarantee, although history has proven that as long as there is a combination of money to be made (or power to be gained) and people willing to stop at nothing to obtain it, even the best security isn't infallible.

“As I said earlier, it is practically unhackable,” says Avidar. “What this means is that, however unlikely the possibility, theoretically such an event could one day happen. But we have taken that into consideration. To be able alter a chain, a hacker would need to take control of more than 51% of computers in the same distributed ledger, and then change transactional records within just a few minutes. Up until this point in time, there is no evidence that this has ever happened.”

“I realize that it will not be easy or even possible to engineer all flows, trades, movements of gemstone and precious metals with blockchain technology short term,” concluded Erik Jens during the CIBJO Congress discussion. “A lot of improvement is still needed. But one needs to a start somewhere and our industry needs to be aware and take advantage of technological innovation. After all, that is why we have gathered here together in Bogotá. It is to achieve a better industry in a better world.”

Next week: How cryptocurrencies could change financing of the entire jewelry industry.