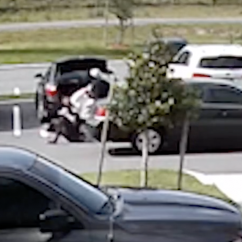 Belle Isle, FL--A jewelry salesman and his girlfriend were robbed outside a hotel in broad daylight on April 22.

According to a news report, the robbers stole jewelry worth $200,000 from the couple in the incident which was caught on a surveillance camera.

In the surveillance video, the salesman and a woman can be seen walking to their vehicle at the Wyndham Garden Hotel parking lot on April 22. They open their trunk, and this is when a black vehicle pulls up. Per the report, it takes seconds for the robbers to steal the items.

The police said that the suspects' vehicle was at the hotel for about 15 minutes per the report. The vehicle was found abandoned with no identification tags. The police, however, were able to obtain fingerprints from the car. All three suspects were wearing masks during the heist.

Anyone with information on the incident is asked to contact Belle Isle Police at 407-836-4357.

Noticing the nature of on-road robberies, Jewelers Security Alliance (JSA) recommends that salespersons must always be alert to whether they are being followed during a day of a sales call or before returning to a hotel, home, or office. Salespersons must also practice evasive driving techniques. Where they circle the block, drive slowly, make a U-turn, and see if they are being followed.

Read more about the incident and watch the video in the news report.