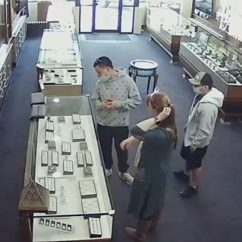 According to a news report, surveillance video of the incident showed two men entering Bechtold Jewelry Store in the evening. Per the report, one of the men distracted an employee behind the counter while the other checked jewelry cases to see if anything could be stolen.

The report stated that roughly $30,000 worth of jewelry was taken in the burglary. The burglars were said to be in the store for over 10 minutes before making any move to acquire the jewelry,

“They were moving around showcases just waiting to find an open case. While one was distracting, the other one went behind the case and checked it, and when he found one that was opened he snatched it,” said Bechtold Jewelry shop owner Thomas Faini, in the news report.

The police have collected several fingerprints from the scene and the shop owner is positive that they'd make arrests soon.

“Surveillance cameras are key pieces of evidence. It’s not going to necessarily prevent crime but in the event that there’s some type of crime that happens it’s something that we really rely upon, and we have a good track record of being able to identify people with those cameras.” Sioux Falls Police Department Public Information Officer Sam Clemens said, as per the report.

Following the robbery, the store upgraded its security, hoping that similar incidents do not occur in the future. The store now requires people to remove their masks before entering the store.

Read more on the robbery in the news report.