Las Vegas, NV—Following last week’s bombshell announcement that De Beers is entering the lab-grown diamond jewelry market—which of course was the talk of the Las Vegas shows—executives from Lightbox, its new lab-grown brand, attempted to assuage industry fears during a keynote luncheon at the JCK Show and reassure retailers that its product would ultimately boost the entire jewelry category.

Jewelers were having none of it. Short of throwing rotten tomatoes, they made their displeasure clear. (Read an exclusive Centurion interview with Lightbox executives about plans for the high-end market here.)

David Prager, De Beers’ executive vice president of corporate affairs, asked, “What is a diamond? Just its molecular composition? Or does provenance matter?" Natural diamonds will always be De Beers’ core business, he stressed. There is $82 billion in consumer demand for diamonds, and De Beers remains committed to it, planning to invest $10 billion in just the next five years, he said.

“Visit Botswana. See the people who have benefited from investments in health care, infrastructure, and education. The entire economic system of Botswana is based on diamonds. Millennials should not have to go to lab-grown diamonds to produce social good.”

He barely finished his opening remarks before things got testy. A gemologist in the audience barked, “In 1985, De Beers squashed Westinghouse from making synthetics and bought the patent. You went after cutters in Israel and India, and threatened that if they cut synthetics from Russia they would not get De Beers’ stones. Now you’re in bed with them!”

“The announcement we made is controversial,” acknowledged Prager. “Technology-produced goods are bound to go down [in price] over time. Lab-grown diamonds were sold at a discount to naturals, but aligned to naturals. It was a worry that consumers would buy them and then see the price go down. Now it’s not a worry.

“Are you saying diamonds are only for bridal?” asked another participant.

“Research shows that for bridal and emotionally intense moments, consumers want natural,” said Sally Morrison, who is heading up brand development and marketing for the Lighthouse brand. “The rarity of natural stones echoes the rarity of those kind of milestone gifting occasions.”

“What’s going to swap jewelers from swapping stones?” continued the irate gemologist. Prager explained that De Beers has developed a unique ultra-short wave length laser technology to put the Lightbox logo inside the stone. It cannot be removed easily, so it will always be able to be identified as lab grown, and also offers a mark of quality.

Lab-grown diamonds take about two weeks to make and, as previously reported, Lightbox will sell all theirs for $800 retail per carat, regardless of color: pink, blue, or white. The linear relationship between the size of a stone and the cost to make it is reflected in the transparent pricing strategy. Styles will be available in quarter, half, or one carat. With an additional small fee for the setting—either $100 for sterling silver or $200 for 10k gold—a one-carat finished piece will cost $900 or $1,000.

Research showed a strong female self-purchase interest in LGD’s, as well as for occasions such as graduation presents or gifting to mothers, daughters, and so forth, said Steve Coe, CEO of Lightbox. Women in focus groups were clear that they’d buy lab-grown for themselves but didn’t want their husbands to buy it for a significant gift. 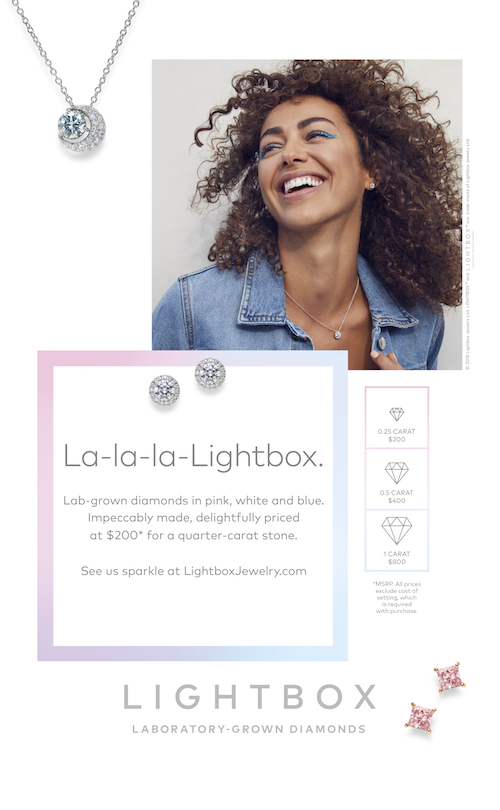 Lightbox advertising features the box motif and all ads will show the consistent pricing.

“We’re prosecco, not champagne. We’re street style, not red carpet. We’re for friends, not fiancés,” said Morrison. “We don’t take ourselves too seriously. We know our place and I promise you we plan to stay in our box.”

“Are you going to sell direct to consumers?” shouted one attendee at that point. Morrison explained the e-commerce distribution plan and future retail partnership goals, but before she finished her sentence, the retailer shouted out, “So you’re screwing the retailers.”

A few retailers were supportive, such as one Delaware jeweler who introduced himself only as “Gordon.” He said, “It fills an important niche. You have a CZ at $50, Moissanite at $300, lab-grown at $800, or a comparable natural diamond at whatever. If the consumer doesn’t have the money for natural, they might have just bought nothing.”

But given that the biggest jewelry trend at the Las Vegas shows was a focus on more affordable jewelry geared for female self-purchase, the Lightbox product is right in line with market dynamics. For instance, Lightbox will sell all its earrings as singles as well as in pairs, reflecting that many women have multiple piercings.

“We are literally diamonds light. We go places that fine jewelry can’t go, places you wouldn’t be concerned if you lose [the piece], or throw it in your makeup pouch when you travel,” said Morrisson.

“This is about the accessories space,” she continued. “The jewelry industry needs to get into this space that is dominated by handbags, shoes, cellphones, other things that are being gifted, and jewelry needs to get into that space with a gift opportunity that can compete.” Gucci bags are gifts too, she reminded jewelers.

“We’re very aware of new purchase dynamics in the marketplace. Consistently, consumers told us in focus groups that it’s the perfect gift for younger woman in the family who are a little careless and may lose it.”

Also, she said, consumers increasingly are crowdfunding gifts for friends, something else Lightbox will encourage. The e-commerce website will have a registry to allow for groups to each buy fraction of a carat for their friend. “We’re creating additional foot traffic for fine jewelry. We want to meet women where they are and how they live. It’s the space we want to live in."