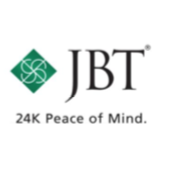 Warwick, RI—In the initial days of the coronavirus pandemic lockdowns, pundits could be forgiven for thinking there would be a mass exodus of independent jewelers in 2020. After all, with consumers hunkered in at home, trying to figure out how to both work and educate children remotely while simultaneously trying to find toilet paper and disinfectants, new jewelry seemed the farthest thing from anyone’s mind.

We now know that independent jewelers ultimately fared extremely well last year. Those same pundits were quick to recognize both a renewed sense of priority for family and meaningful relationships and the very practical fact that many other outlets competing for luxury dollars—restaurants and travel—have been sidelined for now.

Whether direct causality or mere coincidence, the pandemic also seems to have slowed down jewelry store closings. Year-end statistics from the Jewelers Board of Trade still show a net decline in the number of retail jewelry stores in the United States—there were 408 fewer at the end of 2020 than 2019—but that’s a lot less year-on-year loss than we’ve gotten used to seeing. There were 18,369 jewelry retailers operating in the United States at the end of 2020, compared to 18,777 at the end of 2019. (For purposes of its analysis, JBT counts “retailers” as stores that sell fine jewelry to consumers, and counts chains such as Zales or Kay as one retailer, not per its individual doors.)

In total, 495 U.S. retail jewelers disappeared in 2020, compared to 723 in 2019. But once again, very, very few of those were the result of financial distress: only 17 of those 495 were due to bankruptcies. In 2019, only 19 of 723 retail discontinuances were bankruptcies. Although the percentage of bankruptcies increased—from 2.6% of closings in 2019 to 3.4% in 2020—both the percentages and the actual numbers remain minimal.

In 2020, there were 100 retail consolidations (sale or merger), and 395 retail jewelry businesses simply ceased operations. The JBT report does not break out whether those are voluntary owner retirement (presumably the majority) vs. owner illnesses or other non-financial causes of distress.

The same trends are evident in Canada as well, although the numbers are much smaller. 17 retailers disappeared in 2020, compared with 29 in 2019. Of those, 14 ceased operations and three were consolidations. There were no retail bankruptcies in either year.

By region, the numbers changed year on year, but the percentage rankings largely didn’t. The Southeast lost the most jewelers in both 2020 and 2019, followed by the Northeast. The Southwest rose from fifth place in jeweler loss to third place this year, while the South Central dropped from third to fifth place this year. In both years, the Northwest fared best, having the fewest number of store closings. North Central, in third place last year, dropped to fourth this year. 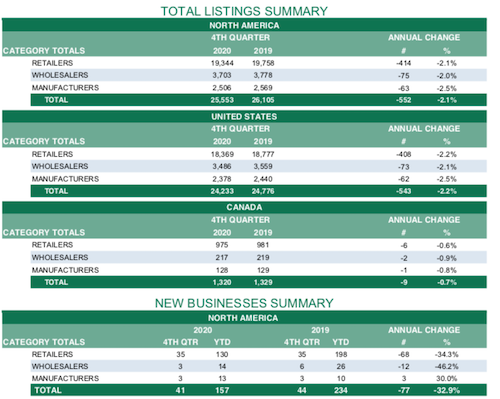 JBT's snapshot of the total jewelry businesses in the United States and Canada as of the end of Q4 2020.

Previous article:
Beny Steinmetz, Convicted Of Bribery And Corruption, Vows to Fight On