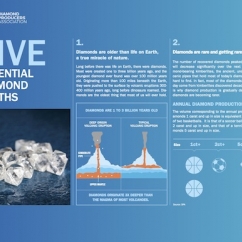 New York, NY—The Diamond Producers Association has developed free educational content for all retailers to use, either for in-store training or in their marketing or both. DPA plans to distribute the assets throughout the United States via email, newsletters, social media and through media buys in select publications. (Left, page one of the mined diamond facts sheet)

“Many retailers we’ve heard from plan to put them on their websites, but some also have requested hard copies for employees to reference at the counter when working with a customer and answering questions, says DPA’s Kendall Tracewski.

DPA is looking into a print plan, but in the meantime the assets, themed “Five Essential Truths,” will be available for retailers to download and print from DPA’s website. One fact sheet covers mined diamonds and one fact sheet covers lab-grown diamonds.

“We’re very excited about this new piece of content and hope it will be a valuable tool for retailers,” says Tracewski. See and download the Five Essential Truths infographic assets here. 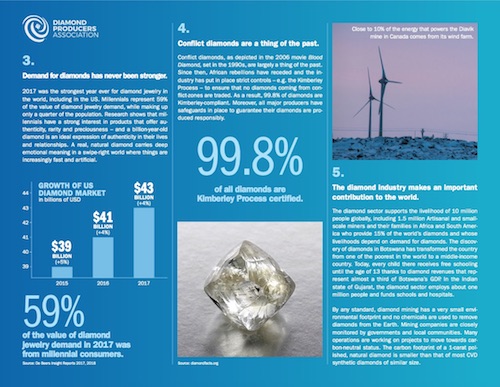 Page two of Diamond Truths, above; below, the lab-grown diamond fact sheets. 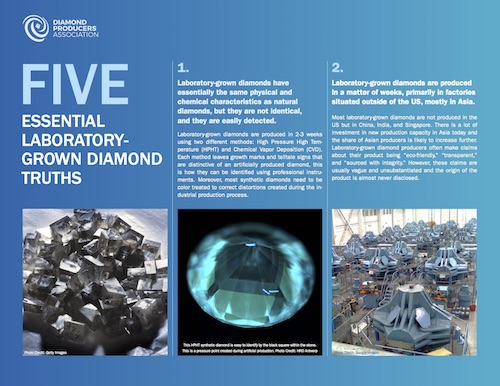 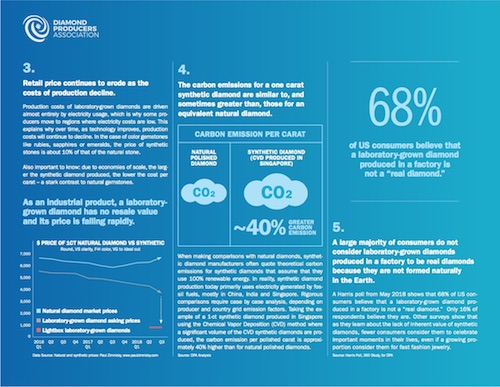 New York, NY--Shrenuj, the now-struggling 100-year-old Indian diamond company that once was of the industry's largest, has a new headache on top of its . The company, which acquired Seattle, WA-based diamond firm Simon Golub & Sons more than a decade ago, is not only facing insolvency but 11 of its executives are being sued by ICICI Bank over claims the loose diamond division defrauded the bank of $15 million.

According to a report in JCK, Simon Golub's loose diamond division--which had no connection to the firm's finished jewelry division--allegedly sold millions of dollars worth of loose diamonds to shell companies it owned in the United Arab Emirates, then used those sales to obtain letters of credit, subsequently converting the money into more diamonds, which then disappeared into those shell companies--leaving the bank with more than $15 million in bad debt.