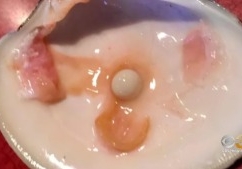 Cape May, NJ—Urban legend no more: while enjoying a dozen clams on the half-shell, a New Jersey man found a pearl in the 12th clam on his plate. Image: CBS3-TV, Philadelphia.

“When I started to eat it I noticed something was in my mouth. I actually thought one of my tooth broke,” Michael Spressler told CBS-3 TV in Philadelphia.

Sarah Stadnicar, a 10-year employee of The Lobster House, told Channel 3 she’s never heard of anyone else finding a pearl in their seafood order. The pearl is 8.8 millimeters and potentially worth thousands of dollars, says the news report, but Maria Spressler plans to have it set into a piece of jewelry, ideally with a sea theme.

Next article:
Sam Broekema Appointed Editor-in-Chief of Only Natural Diamonds