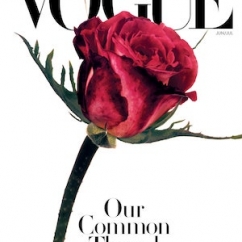 Merrick, NY—Recently, I settled in to read the June/July issue of Vogue magazine. Its cover (shown) featured a single red rose, and the cover line read, “A Common Thread.” The focus of the issue is a look at creativity in a time of crisis. Creativity and relevance.

As a 35-year magazine editor, it was of course interesting to see how they pulled it off without doing all the usual things required to publish an issue: interviews, live photo shoots, layout boards, and so on. But the points made by author Luke Leitch in his article, “Creating The Future” really resonated. He addressed everything from the out-of-whack fashion seasons to the madcap fashion-show calendar to just what consumers are going to look for in luxury.

“As we emerge from our current crisis, the very notion of luxury will surely be transformed,” he wrote. “Instead of signifying something that is gorgeous but ultimately unnecessary, it will likely come to signify something for which you are thankful—something that represents an act of contribution rather than one of consumption.”

That made me sit up and think about relevance.

When the 2008 financial crisis hit, the luxury market had what basically amounted to a global fire sale. Customers impacted personally were selling their luxury goods to pay bills, not looking to buy more. Customers that weren’t personally affected didn’t want to rub it in among friends who were hard-hit. Everyone clamped down, reined in, and high-priced luxury goods went begging.

But luxury consumption didn’t go away, it just went underground. Inconspicuous consumption became the new thing and high-priced goods, while still high priced (and sometimes even higher priced) had to justify their price beyond mere status. Some of the lasting trends that grew out of this time were a shift toward spending for experiences, and the growth of direct-to-consumer value-luxury brands like Everlane and Warby Parker.

Can we look at 2008 as a blueprint for this crisis? 2008 was a financial crisis; this is an existential crisis. Not the same thing.

The Great Recession, though its impact was significant, still didn’t affect a large swath of people. If you didn’t lose your job at the time—and 90% of Americans did not—not much changed. You might even have snagged a much-coveted luxury purchase at a super-bargain price.

But the coronavirus doesn’t care if you have a job or not. It doesn’t care if you live in a 40,000 square-foot mansion, a 40-story apartment building, or a 40-foot trailer. Depending on your circumstances and profession, you might be at greater or lesser risk of exposure on a day-to-day basis, but still nobody knows why one person barely feels sick and another dies. It also has exposed some profound fault lines in our society that must be addressed immediately.

It all makes you think twice about what really matters. Owning the latest and greatest? Traveling to exotic places few have experienced? Or having your life, your loved ones, and the roof over your head untouched?

Certainly retail spending has reflected changed priorities. Essentials of course are rocketing, but in the area of nonessentials, home goods are way outperforming apparel and accessories. Jewelry thus far seems to be holding its own.

It’s also been a time for people to reflect on what they do own, especially if they have had a lot of extra time to get those books read, projects finished, closets cleaned out. And hopefully it also has been a time to see some of the positives that the slowdown has revealed around us: less smog and more time with family, cleaner water (even dolphins coming back!), and so on.

We don’t know how this crisis will impact the human psyche. Will it drive people to an even more frenetic pace, worried that if we don’t do it or buy it now, when will we? Or will it cause us to think more carefully about everything we do and critically re-evaluate its relevance and importance?

Ultimately, we’re lucky to be in an industry that does celebrate the value of human connection. Like every other crisis, that’s what is going to sustain the jewelry industry. It might not come back in full vigor immediately or it might look vastly different, but it will come back. Now is the time to re-evaluate how you will remain relevant to a changed consumer.

Next article:
How To Turn Off Work Thoughts During Your Free Time | Guy Winch | TED