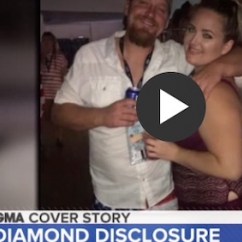 Merrick, NY—By now, you’ve undoubtedly heard about the Good Morning America segment that aired last week, featuring a couple who thought they were buying a natural mined diamond engagement ring and found out later that it was lab-grown.

We all knew it was going to happen sooner or later. The fact that it happened isn’t a big surprise. The fact that it hasn’t happened sooner, is. But what disturbs me even more are the damaging things the show didn’t specifically say. Things that were implied, however unintentionally, and negative connotations that are just simply entrenched in consumer thinking.

But now let’s dig deeper. The couple learned they’d been duped when they took the ring to another jeweler to see what he could tell them about it.

Why did they take the ring to another jeweler for a second opinion? Right there, that says everything about how consumers view our industry. This isn’t surgery. You shouldn’t need a second opinion. I can see the point of a second opinion for a mega-stone or a rare piece that requires scholarly knowledge to determine its origins, but not for the average engagement ring.

Do you do that with any other product you buy? With perhaps the exception of a used car that you want your own mechanic to look over, probably not. You don’t buy an iPhone at Best Buy and then take it to an Apple store to get their opinion of it, do you? Or bring a loaf of bread from one grocer to another?

So why did this couple feel the need to go to a different jeweler to get a second opinion on their diamond?

Because our industry’s overall image, frankly, stinks. Jewelers at the Friday morning Disney Institute session during the Centurion Show even readily acknowledged the leading stereotypes of our industry: it’s too expensive, it’s cheaper online, etc. Do we need to add "cheating" to the list?

How did those stereotypes happen? Years of screaming discount ads have produced a Pavolian response that you should be able to get a “deal” on a diamond. Blame Blue Nile all you want, but it’s the effect, not the cause, of consumers thinking that diamonds are a commodity to be haggled over. The cause is decades of “retail price/your price” ads. “50% off every diamond” ads. The “guaranteed to appraise for twice what you paid” ads. Even jewelers just keeping a calculator next to their loupe during the sales process contributes to the impression that diamond pricing--indeed, all jewelry pricing--is highly elastic.

Good quality better independent jewelers are not the ones that created this monster, but they’re the ones that suffer for it. Your customers trust you, but how much harder do you have to work for it than prior generations did? And every time your customers see a screaming discount or double appraisal ad, even if they do trust you it reinforces a negative impression of jewelers in general.

GMA didn't say how big the stone in question is or what the couple paid for it. To me, that's another red flag. Did the couple pay what a natural stone should have cost? Or did they pay what a lab-grown stone should have cost, thinking they were getting a great bargain? Depending on what the actual transaction was and how clearly (if at all) the lab-grown origins were disclosed, this is slick deception at best, if not flat-out fraud.

Renowned gemologist Antoinette Matlins was interviewed by GMA, and her very sound advice was that every diamond report should clearly state, in writing, whether it’s mined or manmade. Obviously reputable jewelers do that, and most better jewelers offer grading certificates for stones over about 1/3 carat or even smaller.

But the GMA couple, Molly Carlson and Scott Long, never thought to ask if their stone was natural or lab grown. Nor should they have had to. If a consumer needs to ask at every turn, “are you cheating me?” how long before they decide it's not worth buying jewelry at all?

Why is “beware” the default setting on our industry? More to the point, how do we force it to change? How do we get the bad actors out and do a better job of self-policing? We can't leave it all to the associations like JVC or JA, or to the FTC. Their resources are limited and they can't do it all alone. Why do organizations like AGS have to spend so much time and effort to promote trust, vs. innovation and education?

Back to the segment. GMA had two diamond rings on the set, one natural and one they listed as “simulated.” Anchor Michael Strahan was asked to pick which one he thought was the natural stone, which the producers bought from Greenwich St. Jewelers in New York City. Meanwhile, we don’t know if the “simulated” diamond was a misnomer for lab-grown or, in fact, a simulant like CZ. 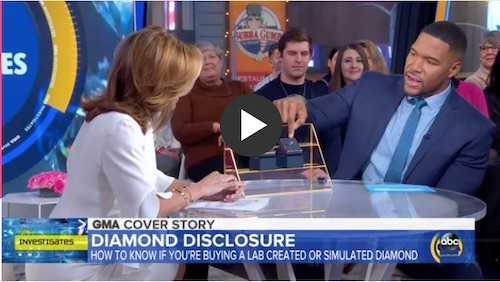 Strahan guessed wrong and chose the simulated diamond. After it was revealed which one was which, he said the natural stone had so much sparkle that he thought it couldn’t possibly be the real one.

Was his choice just a typical reaction where you intentionally choose the less obvious, thinking it can’t possibly be the obvious choice? Or did millions of mined-diamond ad dollars just go up in smoke? Why would he assume that the less-attractive diamond was the real one?

He did then grab the natural diamond and joke about giving it to someone, leaving the less-attractive simulant behind. That was a nice plug, but it still came with a mixed message.

The only real bit of misinformation the segment gave was in stating that inclusions are both the cause of the lack of sparkle in the “simulated” stone and the tell-tale differentiators between natural and lab-grown diamonds. Jewelers know cut is what crates sparkle, and that lab-grown stones also have inclusions. And while not knowing for sure if GMA misused the term “simulated” when they meant “synthetic,” the discussion of inclusions suggests it was a mistake. But it’s still confusing to viewers as the rest of the segment was all about lab-grown stones. (Click here for AGS’s information page and talking points around synthetics.)

A rising tide lifts all boats. And one drop of vinegar poisons a whole barrel of wine. Which do we want to have? The fact that the segment aired at all continues to reinforce which one we do have now: the unfortunate fact that “beware” is the default setting for jewelry shopping.

Previous article:
Simple Strategies Any Retailer Can—And Every Retailer Should—Do To Stand Out