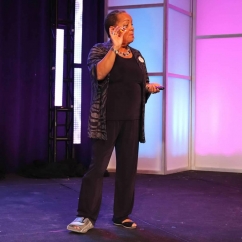 Phoenix, AZ—We’ve all heard the old adage that the devil is in the details. Often overlooked, that's an excellent place for Old Scratch to hide.

In the third installment of the Disney Institute seminar series at the recent Centurion Show, senior facilitator Katie Sanchez (left) explained—in detail—how paying attention to the details ensures that the Disney experience is consistent, repeatable, and never disappoints, and how other organizations can boost their bottom line by doing the same.

“It’s not one big wow. It’s a series of small wows. It comes back to laser focus on all the processes in your organization.”

“I made up the word 'architected.' Why?” she asked the audience.

Randy Cole, CEO of Michigan-based Diamond Vault of Troy, answered. “It’s structure. If you don’t have the structure you can’t build your business on it.”

“It’s about doing it correctly,” responded Sanchez. “If you get an architect to build your home, it’s much different than prefab.”

For Disney, she said, it’s not the magic that makes it work, it’s the methods that make it work. “It’s the processes, not just for guests, but for the cast.”

Many workplaces are fond of motivational or strategy posters, she said. No matter how beautiful the posters might be, that’s not strategy. If your poster says “the customer is king,” but your policy says no refunds or exchanges without a receipt, is that a strategy? Is that even in line with what you want customers to feel in your organization?

Every touchpoint in your organization has to be intentional and detailed, she said. “Everyone in here has the same thing. You sell gorgeous jewelry. That’s the common denominator. What sets you apart? Service.

Disney gets more letters about its cast members than anything else, she said. “The power of service lies in its ability to create an emotional connection as well as a rational connection, which can impact economic outcomes.”

Jeweler Brian Alter of Beaumont, TX, concurred. “Basically you have to win their hearts before you win minds or wallets.”

If it’s a rational connection, it’s just transactional and the customer can go anywhere, agreed Sanchez. But if it’s emotional, they feel connected to you. For example, at Disney parks, the experience begins with the first turn onto the property, long before entering the gates. So cast members came up with the idea of tracking time in the parking lots, so if a guest forgets where they parked, if they remember what time they arrived, the cast member driving the tram can look up and see where vehicles were being directed at that time and take the guests to their car.

“What is your stereotype for the jewelry industry?” she asked. Various jewelers chimed in, but the consensus was that “jewelers are selling an overpriced commodity and it’s cheaper online.”

“We’re too expensive, you can’t come into our store,” said Suzanne Solomon of Providence Diamond.

“I think they think we’re judging them and profiling them when they walk in. ‘Can they afford to buy?’” said Jennifer Demmary of Indianapolis-based Reis Nichols.

A lot of organizations may be aware of the stereotypes, but still don’t do anything about it, said Sanchez. “Service differentiation is the gold star in terms of going further and getting more people coming into your business.”

She highlighted something that subconsciously contributes to the overall Disney experience: cleanliness.

In the early days of Disneyland, Walt Disney saw that most carnivals were dirty, not a place he’d feel good having his daughters visit. He wanted his park to be pristine, which included not being able to see or smell trash.

His management team came up with the idea of covered trash cans, but after the nation’s leading wire trash can manufacturer said they couldn’t be made, Disney went to the competition. “You don’t say no to Walt,” Sanchez said. “To this day, whenever you see covered trash cans with flaps, thank Walt.”

But covered trash cans were only part of the story. Park managers studied guest behavior to determine how many cans are needed (one every 28 paces), and how often they need to be emptied (at 75% full). Furthermore, each area has themed trash cans to match, and a team walks through the park once a month to make sure none are scratched or dented. They’re changed out every two years, at about $1,000 per can.

“How many custodial hosts do you think we have?” asked Sanchez. The answer is 74,000. In other words, every Disney employee.

“Every cast member from part-timers on the front line to [CEO] Bob Iger must pick up trash,” she said. “I’ve seen Michael Eisner and Bob Iger pick up trash. If you radio someone else to pick it up, you will get a coaching session!” That’s the kind of attention to detail that will make or break a business, said Sanchez.

Gerry Amerosi of Gerald Peters in Staten Island, NY, concurred. “What you said about trash cans, you have to do that in your store, floor to ceiling. Is the vent dusty? Are there fingerprints anywhere? Sometimes in our industry you see stores where it’s messy or there’s garbage overflowing.”

If your store is dirty or shopworn, even if your jewelry is good customers are going to question its quality, said Sanchez. She related the story about finding a new pediatrician for her daughter: the building’s parking lot was dirty and dusty, and in the waiting room were three-year-old magazines and crooked pictures on the wall. Although the doctor got good reviews online, she canceled the appointment.

“If they can’t pay attention to simple things, how good will they be at treating my child?” she asked.

Randy Cole pointed out that it applies to training and every other aspect of the store. He described how he got through to an employee that didn’t like role-play training. “That employee is a music lover. I said, ‘How do you think you’d like the concert if the band never practiced?’”

“It’s important to think about what’s going to differentiate you,” concluded Sanchez. “Other parks may have more thriller adult rides—we don’t because we’re family parks—but [the others] are not as clean.”

To finish, she had the audience stand and reach their hands up as high as they could go--then directed everyone to reach up another inch higher.

“Why not just do that the first time? It’s not the big wow, it’s all the little wows.” 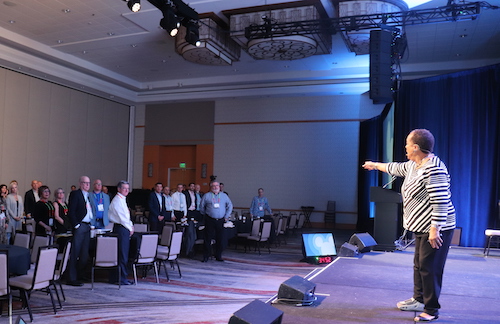 Disney Institute facilitator Katie Sanchez brought jewelers to their feet in a morning exercise about organizational excellence at Centurion 2020.

Previous article:
Smash-And-Grabs At Five Texas Jewelers; What To Do If You Get Hit

Next article:
Editorial: Why Is “Beware” The Default Setting For Our Industry?