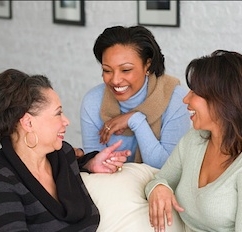 Las Vegas, NV—Pushing back against the very institution it helped to create, Forevermark announced during its annual Las Vegas partner breakfast that its fourth-quarter advertising this year will focus heavily on marketing to women who buy diamonds for themselves.

During the Sunday breakfast, Forevermark executives only a hint of the specifics in its Q4 fall advertising and marketing plans. The core of those plans revolves around a redefinition of what a gift of love means—this from the folks who established diamonds as the ultimate gift of love from a man to a woman—but the brand is keeping its actual plans and its beacon products under wraps for now.

While emotion remains the core of all Forevermark marketing, it's no longer targeting only romantic love between couples. Self-purchasing females, a customer segment that has grown more than 50% in the last decade and now accounts for 30% of the total diamond market, are going to be actively targeted with advertising during the fourth quarter. This includes both single and married women buying for themselves.

While attendees were invited to the Forevermark salon to see some product examples (after signing a nondisclosure agreement), executives from the brand gave a few hints and reassured the industry the products will be updated versions of classics that most people already have in inventory.

Bruce Cleaver, CEO of the De Beers Group, addressed the audience. "What does your business sell? Loose, polished, G-H color, VVS, seven- to eight-grainers? The answer may be all the above, but the answer is 'none of the above.' In the diamond business, we sell meaning, love, and emotion, not crystallized carbon."

Diamonds are bought to reflect emotions, events, and ideals relevant to consumers' lives, and those opportunities are plenty, he said. "We are blessed with the opportunity to sell a product with a history like no other, an epic story rich and unique and varied enough to reflect our own life stories," he said. That's what has driven De Beers since 1888 and what made "A Diamond Is Forever" the most successful ad slogan of all time, he said. 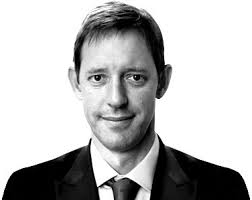 “A Diamond Is Forever” connected diamonds and eternal love in the minds of consumers—but it also connected diamonds specifically with male/female romantic love, and if it could be said there's a downside to success, it's that the message was hammered home so hard and for so long that both jewelers and consumers have had a hard time seeing past the romantic gift of love positioning for diamonds, and haven’t considered them also as a fashion item that women will buy for themselves simply because they like the piece.

But if anyone is going to try to stand tradition on its head, perhaps the message will be best received from the very authors of that tradition. While Forevermark isn't abandoning the traditional gift-of-love message entirely, it is clearly interested in building incremental sales, especially as more Millennials are opting not to marry, or at least not to marry for a long time.

Past efforts to target women—such as the right-hand ring—met with only limited success, perhaps because the product wasn’t on point. But the brand feels it's now in a place to help rocket female self-purchase of diamond jewelry.

"Each diamond can tell a story more beautiful and more adventurous than anything can. Each of us has our own story and nowhere are those stories changing faster than among women who buy sell and wear diamonds," said Cleaver. Femininity is now associated with strength, pride, and personal growth, and women represent a growing voice in the diamond market that can sit alongside but separate from romantic love.

Societal changes are driving other shifts as well. "We are witnessing the rise of the individual,” said Cleaver. De Beers research into consumer behavior revealed that while partnership matters and always will, the growth of individuals within that relationship is more important. The traditional fairy-tale expectation of “meet, marry, and live happily ever after” has shifted, and couples are much more invested in being “happy along the way.”

Cleaver told jewelers that presents more, not fewer, milestones to be celebrated with a diamond, because they are no longer limited to engagement, wedding, anniversary. Instead, there has been a quiet evolution of how people feel about diamond jewelry and even among traditional married couples (such as Cleaver and his own wife), the diamonds bought to celebrate moments after marriage carry very different emotional messages from bridal or anniversary jewelry. And the diamond he and his wife bought their daughter to celebrate her scholastic achievements starts the pattern for her own life, he said.

"We have to capitalize on how people feel about diamonds. That's what brands encapsulate. They are a tool for translating a diamond's latent story to the consumer's mind," he said, giving De Beers a plug as the most powerful brand expertise for 125 years of turning diamonds into meaning for consumers; today with the added element of responsible sourcing of its Forevermark brand.

Forevermark's Q4 advertising will be augmented by a massive increase in ad spend from the Diamond Producers Association—$57 million globally, $50 million of which is earmarked for the United States, almost quadruple last year’s spend. DPA's message will dovetail Forevermark's message reflecting the cultural shift in how people view relationships. (See related story here).

Sustainability and social responsibility is a core element of Forevermark's brand attributes, and one that consumers have demonstrated willingness to pay a premium for. This fall, the brand will introduce the Lorato bracelet in partnership with the charity Tusk, to help with conservation efforts against the highly threatened black and white rhinoceros in sub-Saharan Africa. Rhinos are killed for their horns—erroneously believed to have medicinal value—but it's totally unnecessary to kill the animals because the horns regenerate. Forevermark will donate a percentage from every sale of the Lorato (which means “love” in Setswana, the native language of Botswana and parts of South Africa) collection to Tusk.

The Lorato bracelet in rope, yellow and white gold versions.

Charles Stanley, president of Forevermark USA, took the stage next to talk to retailers and manufacturers about the still-secret “Big Idea,” which will represent a new focus on generating incremental sales rather than trying to launch an occasion-specific beacon product. "This holiday our mission is to go back to basics and do what you are asking us to do and find that classic jewelry design that will symbolize emotional moments and that we can put our marketing dollars to." 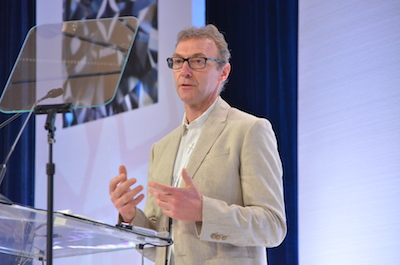 The 2017 program will be exclusive to Forevermark independent retailers and not run in conjunction with any other retailers, he said in a subtle but unmistakable reference to the "Ever Us" two-stone ring that was launched in both independent jewelers and at Sterling brands like Kay and Jared. While some independent jewelers did well with the product, many didn’t want to offer something that’s also available in the mall, he acknowledged.

But the 2017 beacon products remain under wraps for now, and anyone who wanted to see examples at the show had to sign a nondisclosure agreement first. According to Stanley, it’s to prevent copying—though the designs were described as classics that many people might already have in inventory. De Beers does plan to trademark the tagline that will accompany the fall beacon campaign.

He shared some key statistics from Forevermark and De Beers research into the diamond market, studying any diamond jewelry bought or received by women over age 18:

"We took a deep dive into the mindset of women find true motivations between love gifting and self-purchase," said Stanley. He reviewed the insights Cleaver touched on: the shift from happy-ever-after to happy-along-the-way, the incredible power of women as both individuals and as a global force growing to $5 trillion in income (more than the GDPs of China and India combined) and, finally, the importance of individual growth.

"A happy marriage today involves people with personal ambition as well as joint goals. It's no longer a sense of duty but personal development and continual reassessment,” said Stanley. "We have an amazing opportunity to build a powerful concept campaign just like we did with Center Of My Universe. It's a really rich opportunity for us," he said.

As for the still-secret product, it will be a collection of multi-diamond necklace, earrings, and rings, with the code name Qualities for the moment.

"We need all of you on board to make this a success. A rising tide lifts all Forevermark boats."

For the brand's part, a 360-degree marketing campaign is planned, incorporating print, heavy digital, social media, and television. The website landing page will drive consumers to Forevermark jewelers with the inventory. For jewelers, there will be in-store visuals including Duratrans, and partnership advertising opportunities for Forevermark jewelers.

Stephen Lussier, CEO of Forevermark, said the advantage to this planned effort is that it is an addition, not a subtraction. It doesn't cut out men, it includes women. Men enjoy gifting and this doesn't make men feel as though they're not needed.

“It gives them an opportunity to gift for more than the standard reasons of the past. It's all in how you spin it. Look at past [De Beers] products. They weren't selling because they have no meaning, so if they are made relevant, people love them again."

Next article:
Head-On #16: Best Wishes To Everyone For A Great Week In Las Vegas, And A Bit Of Advice