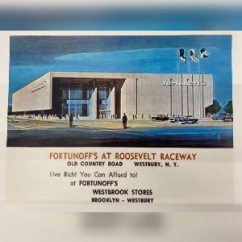 New York, NY--What started as a pots and pans business on Livonia Avenue under the higher train tracks has turned 100 years old — only now a name that has tasted success being a multimillion-dollar home furnishings and jewelry operation.

[Image by Fortunoff via Newsday]

Fortunoff is now 100 years old, and its owners point out the multiple reasons that make the milestone special.

"I'd love for people to know that you can adapt and grow and change and take something that was a dream and continue to have it be something great but in a different way," said Esther Fortunoff, granddaughter of Fortunoff's founders and the president of Fortunoff Fine Jewelry, in a news report. "

"And, you know, there's adversity, and then there is rising above it and finding a new way to operate," Esther added in the report.

Fortunoff's journey as a chain of department stores ended in 2008 and 2009 after its bankruptcy post three years of its sale.

But that wasn't the end. Max and Clara's eight grandchildren bought back the company's intellectual property, including the brand and trademarks, under a holding company called Fortunoff Brands LLC,

Learn more about Fortunoff's journey of a century and its various transitions in the article.