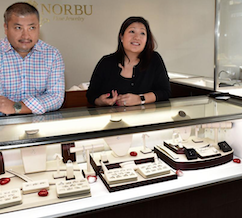 Lancaster, PA—Tenzin and Sanya Norbu met when both worked for a diamond supplier in New York City. But in 2016, the couple, by then married with a two-year-old, decided to leave New York City and return to Sanya’s hometown in the heart of Pennsylvania Dutch country, where they opened two restaurants and introduced Bhutanese and Nepalese cuisine to people more familiar with chicken pot pie and scrapple. Image: Suzette Wenger for LancasterOnline.com

An article in Lancaster Online says both restaurants in neighboring Cumberland County have been highly successful, spurring the entrepreneurial couple to bring their concept to downtown Lancaster, an area with lots of offices and a rapidly growing arts scene. They found the perfect space, did some necessary renovations, and got ready to open their third restaurant in April 2020.

Then the pandemic hit. Pennsylvania, along with most of the nation, went into lockdown in mid-March. Capacity restrictions on indoor dining have remained in place throughout the state ever since. Business at the couple’s other two restaurants has dropped by about 60%, but they’ve been able to survive on takeout, says the article. But those restaurants both already have a loyal following, whereas a new restaurant—especially one offering an entirely new kind of cuisine for the area—needs the in-person dining experience to get established.

Since that’s not an option right now, and the bills still need to be paid (although the couple’s landlord is extremely flexible), they fell back on what they both knew how to do: sell diamond jewelry. As of late December, the new Lancaster space is open as Norbu Fine Jewelry. And although the store is new, at least it’s selling a product as familiar to residents as chicken pot pie.

Next article:
Webinar Addresses How To Avoid The Pitfalls Of Online Jewelry Sales