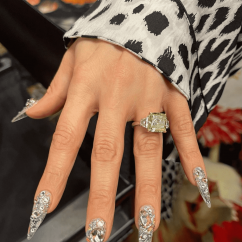 Las Vegas, NV--Jennifer Lopez and Ben Affleck are married — finally! The couple announced they officially tied the knot in a late-night ceremony in Las Vegas. And that gives us enough reasons to think about the sparkling green engagement ring at their wedding.

“Love is beautiful. Love is kind. And it turns out love is patient. Twenty years patient,” J. Lo wrote in her newsletter ‘On the J. Lo.’

A Natural Diamond Council report notes that the couple exchanged vows with their children by their side and exchanged engagement rings.

Natural Diamond Councils' in-house gemologist Grant Mobley had some words to say about the engagement ring.

“The rarity of a natural green diamond cannot be overstated,” he said per the report. “Generally speaking, green is the second rarest natural color of a diamond, with fancy red being the rarest.”

The report notes that Ben’s first proposal to Jen was with a pink diamond, so it only made sense he would opt for a green one this time. “Only a small handful of green diamonds come to the market every year and almost never are they in the vivid color and size of this diamond," the gemologist said in the report.

The report adds that J.Lo's ring is an 8.5-carat cushion cut piece purchased from Ilan Portugali of Beverly Hills Diamonds.

“The exact color grading of the diamond has not been disclosed, but it is clear in the photos that it is exceptional and among the rarest,” says Mobley in the report. “I believe it would be graded as Fancy Vivid Green, and I would estimate the value to be at least $8 million.”

Read more on J.Lo's diamond in this report.

Previous article:
Here’s Why a Night of December 1976 Is Special for Elvis Presley’s Jeweler