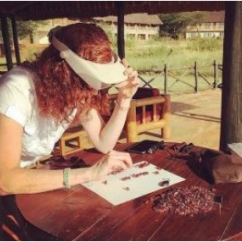 New York, NY—Centurion Newsletter editor Hedda Schupak will moderate a panel discussion about the changing roles of women in the fine jewelry industry this Thursday evening, April 12, at the Gold: Vortex, Virtues, and Values conference sponsored by Initiatives in Art and Culture. The two-day event will be held at Bohemian National Hall, 321 E. 73 St., New York City. (To register, click here and enter code CENTURION for a discounted attendance fee.)

A champagne reception and the discussion, titled “A Rising Tide: Women And The Jewelry Industry,” begins at 5:15. It will address both the progress women have made and stumbling blocks they still face in the fine jewelry industry. Topics will include career opportunity, marketing jewelry to women for self-purchase, and gender discrimination, pay gaps, and sexual harassment.

Gender-based salary disparity along with sexual harassment is making news in and out of the jewelry industry. An article published last week by UK-based trade publication Professional Jeweller (no connection to the former U.S. magazine by that name) found significant gaps in pay between male and female employees at Britain’s largest jewelry companies. In the United States, a federal appeals court in California ruled on Monday that relying on a woman’s salary history to determine pay for a new job is illegal if it means she will earn less than male counterparts. The court held that basing compensation on prior salary is inherently discriminatory because of rampant historic gender disparity.

Sexual harassment, of course, rocketed to prominence with the launch of the #MeToo movement following revelations against movie mogul Harvey Weinstein. In the jewelry industry, Weinstein’s now-former wife Georgina Chapman’s line of jewelry for Helzberg was dropped shortly after the news broke, while former Signet CEO Mark Light stepped down in July  as the company faced allegations of both sexual harassment and gender disparities in pay and promotion.

Other topics to be addressed during the two-day conference include how technology is transforming consumer behavior, ethical sourcing of gold and jewelry, and a focus on influencers and regulation of social media.

For more information about the IAC Gold Conference, click here.