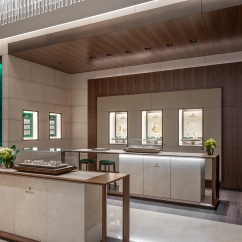 Bala Cynwyd, PA—105-year-old Govberg Jewelers traces its roots back to 1916, when Albert and Samuel Govberg first opened a small jewelry store in 1916 in Philadelphia, PA. Six years later, Albert struck out on his own, opening Govberg Jewelers in 1922. In time, he passed on the store to his son Irv and grandsons Danny and Jeffrey who, like most jewelers’ children, had worked in the store in some capacity almost all their lives. Image: Interior of Govberg's store on Rittenhouse Square in Philadelphia.

But when third-generation Danny, now chairman, formally entered the business as a career in the early 1980s, he began what would ultimately be its transformation from a traditional family jewelry store to watch behemoth.

When he first announced his intention to expand into luxury watches, Irv, his father, was not impressed. Like most better jewelers in the 1980s, Irv believed there was no money in watches anymore. But Danny Govberg set out to prove his father wrong. Not only did he embrace the category and make the Govberg name synonymous with luxury watches in Philadelphia, but the store is now so renowned for its watches that its website URL is www.govbergwatches.com, and the only mention of jewelry on the website is for its repair services.

Govberg’s first foray into watches was by selling previously-owned luxury timepieces when the family business was still on Jewelers Row in Philadelphia. High-end brands like Rolex don’t look for a jewelry-district setting, so like many jewelers who can’t get coveted brands, Govberg edged his way into luxury watches through the secondhand market. Later, when the store moved away from Sansom Street and expanded into upscale neighborhoods like Philadelphia’s Rittenhouse Square and the affluent Main Line suburbs, Govberg did become an official authorized retailer of Rolex, Patek Philippe, Hublot, and other top brands. 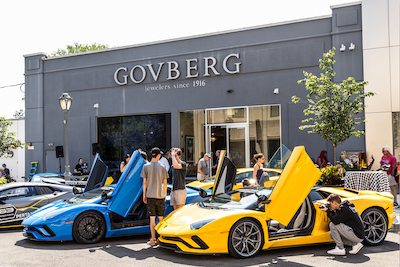 A Roger Dubuis event at Govberg's store in Ardmore, PA.

But Govberg not only never lost his touch in the secondhand market, he also was one of the first to hold his finger to the wind and sense how it was blowing.

Secondhand luxury retail is rocketing in general, but especially in jewelry and watches. McKinsey & Co. identified secondhand retail as one of its six seismic shifts impacting luxury jewelry and watch retailing. Sales of pre-owned watches are expected to become the industry’s fastest-growing segment, rocketing from $18 billion in 2019 to $29-32 billion annually in 2025, says the consultancy.

Even as Govberg became a primary luxury watch destination, its secondhand watch business continued to thrive, particularly online, driven in part because top brands were slow to embrace the digital world and forbade even their authorized retailers to sell new models online. But Govberg recognized that what the brands wanted and what customers wanted were two different things, and the only way around it—much like the way around brands’ distate for a jewelry-district environment—was with secondhand watches.

WatchBox was spun out of Govberg Jewelers in 2017 to help grow the business both domestically and abroad, says an article in Philadelphia Business Journal that recently profiled the Bala Cynwyd, PA-based business:

Govberg started WatchBox alongside co-founders Tay Liam Wee — who built and sold his own watch company Sincere Watch — and Justin Reis, co-founder of Presidio Capital and CEO of WatchBox. The trio raised $100 million from Singapore-based private equity firm CMIA Partners to fund its growth in late 2017.

“We didn't just come together as a bunch of guys five years ago and say, ‘Let's watch this business,’” Govberg said. “We pretty much had a 100-year-old company already.”

The business has been growing an average of about 25% to 30% annually, he said.

WatchBox both buys and sells timepieces, Govberg told the Business Journal. It buys from collectors, boasting a total inventory value of about $150 million. Its average timepiece sale, meanwhile, is about $20,000, and Govberg told the paper the site sells at least one $100,000+ watch daily. It's projecting $300 million in sales this year.

About 90% of WatchBox sales are online, though it does have brick-and-mortar stores. Those are mainly abroad (in Singapore, Switzerland, Hong Kong, and Dubai, says the article), but also in Govberg’s hometown. The Bala Cynwyd headquarters of WatchBox has a retail showroom, and the Govberg stores are—of course—authorized WatchBox retailers. Eight more stores are in the works, says the article, with five of those in the United States: New York, Los Angeles, Miami, Houston, and Dallas. Govberg told the Business Journal the company already has robust client bases in those locations and that opening physical stores will “turbocharge” those markets.

Brands, meanwhile, are coming around: they’re realizing that rather than being a threat, the secondhand market proves their timepieces hold value and helps bolster trade-up sales. Some have even jumped on the resale bandwagon and instead of fighting it, are now selling their own pre-owned timepieces on their own websites.

Next article:
Free Webinar: Why Your Business Should Be Texting