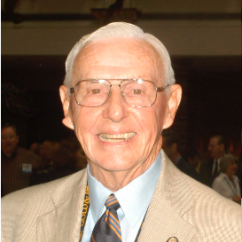 Los Angeles, CA—Alfred L. “Al” Woodill, the much-beloved former executive director of the American Gem Society, has died at the age of 101.

Woodill was born December 26, 1919. A California native, he was a nephew of AGS (and GIA) founder Robert M. Shipley’s wife, Beatrice. He worked for the Shipleys while in high school and later at the University of California, Los Angeles (UCLA), where he graduated with a bachelor of science degree in business in 1946. While at UCLA, he took time off to serve as a bomber pilot in World War II, rising to the rank of captain in the Army Air Corps.

“We are all heartbroken at the loss of this great man, who was so instrumental in shaping the American Gem Society. Mr. Woodill was a direct link for many of us to Robert M. Shipley himself. But beyond that connection, the legacy he left on our association is immeasurable,” said Katherine Bodoh, RJ, CEO of the American Gem Society and AGS Laboratories. Woodill died August 16.

Early in his career, Woodill traveled with Shipley selling GIA courses, promoting the AGS and attending Conclaves. Since he knew shorthand, Woodill would write as Shipley dictated articles during their many long trips by car. In 1947, Woodill took over as Shipley’s successor at AGS.

Known to his many friends as “Big Al” or “Mr. AGS,” Woodill was credited with the transformation of AGS to the powerhouse of an association that it is today, says a tribute on the association's website. For 40 years, Woodill led AGS through its growth in membership, the Guilds and member services, along with the changes in the AGS Diamond Grading Standards, Governance and Education requirements. His quiet but determined leadership guided the Society towards fulfillment of the Shipley dream. He was awarded Honorary Membership by the AGS board of directors based on his service to the Society and the jewelry industry.

In 1970, Woodill received the prestigious Robert M. Shipley Award, an annual recognition conferred upon a member of the AGS for outstanding service to the Society who exemplifies the high purposes, objectives and ideals of the Society. In 2000, he was honored with the AGS Circle of Distinction Lifetime Achievement Award.

Woodill retired in 1987, but the AGS wasn’t ready to say goodbye. Instead, the organization named him “AGS Ambassador.” Even after his retirement, Woodill continued to offer his insight to AGS leadership. He made a point of calling each new president of the board of directors, welcoming them to their role and lending his advice. Ruth Batson, former AGS CEO for 23 years and, later, current CEO Katherine Bodoh both also benefited from his wisdom and guidance.

Woodill last attended Conclave in 2017 in Hollywood, CA. He attended the Shipley luncheon and received a standing ovation from the multi-generational audience, all of whom either knew him, or had heard stories of this legendary AGS treasure.

Katherine Bodoh used a quote from the legendary composer Irving Berlin on AGS’s Facebook page to pay tribute to Woodill: "The song has ended, but the melody lingers on."

“Al's many contributions to the AGS songbook will always be remembered. He was the first and most likely the best Executive Director the Society will ever know. His decades of commitment, passion, and love for the Society never faded. He inspired me to learn about our history and Shipley's vision. Mr. Woodill, the song has ended, but the melody will never be forgotten.” 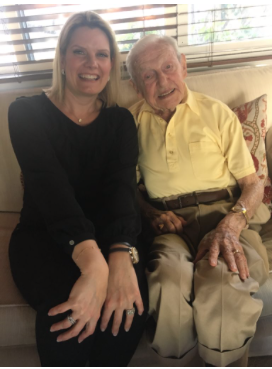 Tributes poured in from AGS members and other industry leaders. DCA president Terry Chandler called him “A true mentor and leader. Godspeed Al!”

Jeweler Brian Schubot wrote, “Mr. AGS. You will be missed. Al was the one who made Mr. Shipley’s dream a reality. He was responsible for making the AGS the most respected organization in our industry. Your legacy will live on.”

Jeweler Rod Miyata recalled Woodill’s gentle persistence. “Al Woodill was a kind and gentle man but relentlessly persistent. He would stop by our store periodically until we finally joined the AGS. Although Robert Shipley started both the GIA and AGS, Mr Woodill will forever be known as the figurehead of the AGS.”

On a personal note, I remember Al Woodill well. He was still running AGS when I joined the industry as a junior editor at JCK magazine in 1986. Like the other great men leading the industry then—it was still pretty much all men at that time—he would greet me and take the time to speak with me as patiently and respectfully as he would any of the industry’s top leaders. Any AGS or industry function from then until the time he stopped attending was not complete without a moment to say hello and chat with Woodill.

As Cathy Calhoun, a former AGS president, recalled on Facebook, “Mr. AGS, Big Al...A true AGS Legend with such passion to carry out the vision of his uncle Robert Shipley. He live & breathed our mission. R.I.P. Al, you did good.”