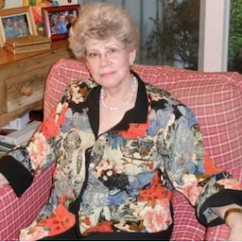 Los Angeles, CA—Nancy Ashe Brewer, founder of Nancy B, a trailblazing woman responsible for many firsts in the jewelry industry, died peacefully at home August 5 after a long illness. She was 75.

Brewer’s eponymous company, Nancy B & Co., was not only one of the earliest branded companies in the industry, but was founded and helmed by a woman in 1978, at a time when women weren’t leading manufacturing companies or admitted to many industry organizations. Its product line featured fashion-forward 14k gold earrings and colored stone jewelry designed for working women to self-purchase.

Brewer herself was a staunch advocate for women, a strong supporter of the Women’s Jewelry Association from its inception. She also was one of the first female members to be admitted to the Twenty-Four Karat Club of the City of New York after it began to admit women in 1984, and served with distinction on many boards of the industry, including Jewelers Board of Trade, Jewelers Vigilance Committee, MJSA, JIC, the jewelry circle for City of Hope, and sat on the GIA (Gemological Institute of America) board of governors. Both MJSA and WJA honored her with their Lifetime Achievement Awards.

“She left things better from her involvement and care,” said Dione Kenyon, former head of the Jewelers Board of Trade and currently the chair of the GIA Board of Governors. “She was a tremendous friend and mentor to many women and men in the industry. I was fortunate to know Nancy for over 35 years as a mentor and dear friend. She was a remarkable woman and entrepreneur; brave, self-made, and one who gave back to our industry and fostered the development and success of her peers. I am one of many who are deeply grateful for the encouragement, support and leadership she provided over the course of her career."

Brewer sold Nancy B & Company to Providence, RI-based B.A. Ballou in 2005; a year later Carla Corporation acquired the Nancy B. line, which it still produces, from Ballou.

“Nancy enjoyed a great jewelry career and was very active within the industry that she gave so much to. Her signature designs are still handcrafted today and reflect the attention to detail that Nancy always held herself to the highest standards,” said Brian Fleming, president of Carla.

On a personal note, Nancy was one of the first people I met when I became JCK’s fashion editor. Her vision of well-designed, affordable fine jewelry that women would purchase as a part of their wardrobe was one I shared and to this day continue to advocate. We shared many laughs over the years, especially as part of the American contingent attending the January Vicenza fair every year. She had a very blunt, straightforward manner that told it like it is—never rude or hurtfully, but never sugar-coating it.

In her out-of-industry life, Brewer was a stauch Democrat who was actively involved with the party and attended many political rallies with her two younger sisters, Sally and Sue, who survive her.

Next article:
What do Jewelers and Netflix Have in Common?