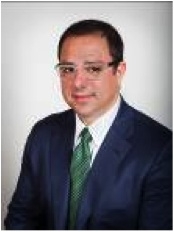 Ryan Berg To Chair Jewelers of America Board

“Ryan has the right combination of experience that will make him an effective board chairman. [He] is helping his family-run jewelry business adapt, grow and evolve. He brings a fresh perspective that focuses on growing Jewelers of America and all of our members’ stores’ bottom line. It is an honor to have him lead during his term as Jewelers of America board chairman,” says JA president and CEO David J. Bonaparte.

“My service on the Jewelers of America board has given me deep insight to the value that Jewelers of America provides. JA is poised to deliver tremendous value to its members and the industry at large,” says Berg. “I look forward to working more closely with the board and Dave Bonaparte as we continue to transform Jewelers of America and create a meaningful impact on the jewelry industry’s business outcomes.”

Separately, Jocelyn Prestia of Unhada Jewelry was named the 2015 recipient of the JA Mort Abelson New Designer of the Year award at the JA New York show, which concluded Tuesday.

The New Designer of the Year Award is named for the late Mort Abelson, credited with coming up with the idea of creating a platform to introduce up-and-coming designers to the mainstream market. From Abelson’s idea JA’s New Designer Gallery was born in 1977, and has helped to jump-start the careers of many designers, including David Yurman, Whitney Boin, Penny Preville and Steven Kretchmer, among others.

This year’s New Designer Gallery featured 10 brands, including Unhada. The pavilion is limited to jewelry-makers that have never before participated in a trade show.

The jewelry of Un Hada (which means "a fairy") fuses lyrical designs with rare and unusual stones. Un Hada is the creation of Jocelyn Prestia, who, as a writer, believes fine jewelry should be a flight into fantasy, making the wearer feel as though a bit of fairy dust has just been sprinkled upon them.

When she began collecting antique jewelry she realized that each piece had its own story and, in 2004, Prestia moved to Thailand to study gemology at GIA's Bangkok campus in order to better understand and appreciate the antique jewelry she was collecting. But she soon found that the gemstones themselves told a story, and that the more unique and interesting the stone, the more mysterious yet revealing it could be.

Whilst studying jewelry design in Bangkok, the idea of little fairies started to creep into her mind, and designs translated onto paper, allowing her to create pieces that not only featured these extraordinary gemstones, but also opened a door to imaginary worlds.

Roskin’s career in the industry spans many sectors from retail to education to journalism. Roskin is a fourth-generation jeweler who started his career in his family’s Marion, IN jewelry store. After leaving retail, he was an instructor in diamond grading and colored stones at GIA, and executive director of its Alumni Association. He also has taught in the jewelry program at Fashion Institute of Technology in New York.

A published author of Photo Masters For Diamond Grading, Roskin is the former senior gem editor at JCK magazine, and was the gemstone editor of BASELWORLD Daily News. He established Roskin Gemological Services, which includes the well-known Roskin Gem News Report.

Roskin’s appointment is effective August 4. He will be based out of ICA's New York office. He will be responsible for ICA's day-to-day activities, and will contribute to the development of the association. He will report to the ICA board of directors.

"It is indeed an honor to be the new Executive Director of the ICA," said Roskin. “ICA is a not-for-profit organization which promotes the understanding and appreciation of all aspects of the colored gemstones and jewelry industry. This is line with my personal beliefs and relates to all of the things I have written about, and have taught for decades."

ICA President Benjamin Hackman said, "We are delighted that Gary will be joining the ICA in such an important position. There is no doubt that this pivotal role will enhance the work of the ICA, which is the leading worldwide organization in the field of colored gemstones and jewelry.”

Toronto, ON—The Canadian Gemmological Association’s (CGA) two campuses received a contribution of CSARITE gemstones for student study. Milenyum Mining, Ltd., miners of the gem, made the donation at the request of the CGA to expand their students’ knowledge of the natural, single source gem, actively mined at only one global source deep in the Anatolia Mountains of Turkey.  The contribution consists of a variety of sizes and shapes of faceted gems and rough specimens:

Donna Hawrelko, president of the CGA remarked on the size and quality of the donation, “Receiving a contribution of Csarite gems of this magnitude enables CGA to share knowledge of this gem with our students as awareness grows within the marketplace.”

“We are thrilled that the Canadian Gemmological Association recognizes the increasing market exposure of Csarite and the importance of correct identification of this unique gem,” stated Murat Akgun, president of Milenyum Mining Limited. “The fact that Csarite enjoys a completely transparent pipeline makes it a favorite with students, designers and consumers alike.”

Next article:
Consumers Say They Want Fair Trade, But Will They Pay For It?