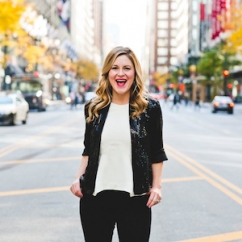 Holler’s session, “Fear is My Homeboy: 4 Ways You Can Transform Fear Into A Powerful Secret Weapon,” will be held at the InterContinental New York Barclay.

Rather than running scared from fear, keynote speaker, author, and professionally trained improviser Holler has embraced it. An alumna of The Second City’s Conservatory in Chicago, she studied and performed improvisational theatre at night while working in sales and marketing full time by day. That experience shaped a new vision for success that she’s shared with audiences across the country as founder and chief fear boss of Holla! Productions.

In this fun and interactive session, Holler takes the experimental ideas she learned from improv theatre and helps participants apply them to the unscripted stage of everyday life. Her mission: To stop fear from stealing your joy and robbing you of opportunities to succeed the way you want. Judi helps audiences transform fear into a powerful secret weapon so you can connect in even more powerful and profitable ways.

Participants will gain an understanding of fear’s greatest hits, how fear can help you, how to not be burdened by fear of failure, and tools to help manage fear, both personally and professionally. She will also share a five-step fear setting framework to help you take action and offer a sneak peek into the world of improv theatre.

Holler’s forthcoming book, Fear Is My Homeboy: How to Slay Doubt, Boss Up, and Succeed on Your Own Terms, comes out May 28, 2019, and has been endorsed by best-selling author and media personality Mel Robbins, who calls it “relatable, relevant and, most importantly, actioinable!”

Fear Is My Homeboy is available for pre-sale now on Amazon, 800 CEO Read, and Barnes & Noble. The first 100 people to register for the convention will receive a complimentary copy. The Convention agenda also includes the following keynote addresses: Election Outlook 2020, presented by Charlie Cook; Key Investment Trends to Watch, presented by Michael Vaknin of J.P. Morgan Private Bank; and Jewelry Customers’ Path to Purchase, presented by Neeraj Mehta of Synchrony.

Akron, OH—It’s been another very bad week for Signet Jewelers.

Last week the retailer--parent company of Kay, Zales, Jared, Piercing Pagoda and other banners--announced its so-called “Path To Brilliance” will be lined with pink slips; this week it hit a giant pothole on that path when a scathing New York Times Magazine exposé detailing much farther-reaching implications of its gender and sexual harassment troubles than previously thought broke on Tuesday. 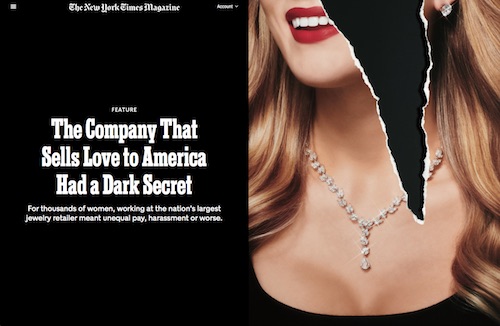 The New York Times Magazine article went into extensive and graphic detail about sexual harassment at Signet, as well as gender discrimination.

After launching its three-year Path To Brilliance turnaround plan last year, in February 2019 the retailer announced plans to reduce its workforce, preferably by enticing enough employees to accept voluntary buyout packages. If enough employees signed up for the “voluntary transition program,” the retailer had hoped to avoid layoffs—but acknowledged that a certain cost reduction had to be achieved either way, voluntary or not.

Last week Signet announced an involuntary reduction in force after falling short of its hoped-for voluntary numbers. Affected employees—support center and higher-level employees in both Akron, OH, and Dallas, TX—were expected to leave the company by April 26. Store-level associates were not offered buyouts.

Although the company didn’t specify either the number of employees being let go or the budget savings it will realize through the personnel cuts, at the start of the Path To Brilliance strategy, Signet CEO Gina Drosos announced plans to cut $200 million by fiscal year 2021—including $60 to $70 million in the upcoming 2020 fiscal year. The company already shed 100 jobs with the closing of a manufacturing facility in Dallas and it plans to close another 150 stores this year.

But the news got worse with the New York Times Magazine's scathing feature article which interviewed dozens of former employees and detailed many more instances of the sexual harassment, gender discrimination, and cover-up the firm already was accused of. While company spokespeople tried to downplay the article as rehashing old news, the extent to which that culture extended, the fact that it still flourished in 2017 even after it was purportedly corrected, and the depth of details (including some well-known industry names) were new revelations.

“In opening a new lab in the competitive US market, especially in New York City, we knew it was essential to distinguish SGL from all other labs,” explained Shirin Bandukwalla, co-director, SGL Worldwide. “We needed to do more than merely provide services to the industry. It was critically important to identify and create solutions for jewelry retailers, while at the same time provide the ultimate assurance and confidence for the end consumer.”

SGL assures consistent and accurate quality certification by having all 16 labs use the same technology, methodology, and protocols for detection, grading, authentication and certification. This system practiced across the SGL network separates them from all other gemological laboratories worldwide.

SGL also has launched the first-ever mobile lab service in the United States, allowing retailers to have a team of SGL professionals visit their store(s) to screen, grade, and certify finished diamond jewelry on-site. A new and unique alternative to shipping jewelry to the lab, the mobile lab is easy and convenient, providing retailers with an excellent opportunity to have many (or all) of their products certified at once. This service also includes the screening for lab grown vs natural diamonds.

As part of its New York lab launch, SGL has introduced its Dia Screen instrument for lab-grown diamonds. The machine screens for both CVD and HPHT lab grown diamonds, natural diamonds, and isolates and identifies Moissanite and cubic zirconia.

“We can’t underestimate the significance of separating HTHP from CVD lab grown diamonds,” says Chirag Soni, co-director. “It’s no longer simply lab-grown vs. natural. The growing price distinction alone will make it critically important for the industry to separate HPHT from CVD lab grown.” Dia Screen is offered in two sizes (with identical technology). It currently is available for sale at SGL New York and will soon be launched across the laboratory’s worldwide network.

To visit the SGL booth at JCK in Las Vegas (booth 3094 in the Diamond Pavilion) for a demonstration of the Dia Screen instrument, call Steve Feldman at (929) 390-5252, or email steve.feldman@solitaire-labs.com

Previous article:
How Google Decides On Your Ad Prices (And How To Lower Them)