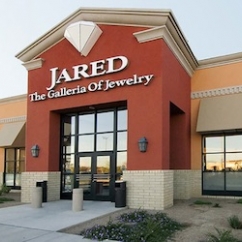 Akron, OH—Signet still hasn’t found the magic formula to turn its struggles around. The retailer, whose main banners include Jared, Kay, Zales, Piercing Pagoda, Peoples Jewellers (in Canada), and e-tailer James Allen, seems to take two steps back for every step forward. Following an ongoing series of personnel shuffles and prior legal troubles, it just reported another down quarter and more leadership changes. (Left, a Jared store.)

Last week Signet announced both a decline in comp sales for its most recent fiscal quarter and the departure of its president, Sebastian “Seb” Hobbs. It also announced plans to close another 150 stores on top of the 262 it already closed in the past fiscal year, bringing the number of doors closed to more than 400 and reducing the company’s retail footprint 13% in three years.

Though results were mixed by nameplate, same store sales overall dropped 2% for the period, after a 1.3% drop in holiday sales. The Zales, Peoples, and Piercing Pagoda divisions were up; Kay, Jared, James Allen, and the firm’s UK stores were down.

And Hobbs, who was successful in his four years (2013-2017) heading up the company’s UK operations before heading stateside, stepped down effective April 4, though he will remain on board to advise CEO Gina Drosos through June 30. Hobbs’s departure follows an internal reorganization last month, in which Jamie Singleton was made president of Kay, Zales, and People’s, with additional oversight over some other legacy banners. As a parting gift, Hobbs will receive a full year’s salary and whatever performance bonus he would have gotten for fiscal 2020 had he stayed. 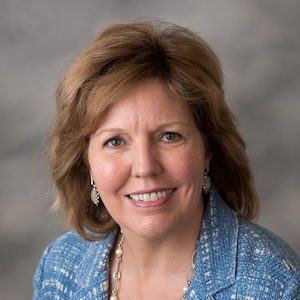 Despite lower comps at James Allen, online sales were a bright spot for the retailer: overall e-commerce rose 11.2% in the fourth quarter and 39% for the year. About 10% of Signet’s total sales now come from online. And overall, its revenue—while down 6.1% year-on-year—beat expectations, as did its earnings-per-share.

But if a 6.1% decline still beats analysts’ expectations—and if the company is making its numbers through cost-cutting—what’s going to happen when there’s nothing left to cut?

While the luxury sector continues to be the strongest part of the jewelry industry, mid-market competitors Ben Bridge and Helzberg—both owned by Berkshire Hathaway—are doing well, which proves there’s clearly a market for the kind of stores Signet operates. (Berkshire Hathaway’s annual report doesn’t break out individual results for either chain, but its retail and services division of which jewelry is a part was up 29% year-on-year from 2017 to 2018.) And even Signet’s own results are inconsistent, with half their nameplates up and half down.

Drosos told analysts Signet needs to get better at understanding product life cycles, citing the Ever Us two diamond product and beads as key examples of products past their prime. One can understand the bead problem—it’s so taste-specific that even Pandora is struggling to find a future beyond the bead—but two-stone diamond jewelry? That’s timeless stuff that any jeweler should be able to sell!

Even without a specific hero product or a heavy ad push from De Beers/Forevermark (which still has a robust product selection on the Ben Bridge site), two-stone diamond jewelry is easy to understand and adaptable to a wide variety of tastes and budgets. And DPA’s new generic advertising, with its focus on authenticity and individuality, makes the category a natural for personal storytelling. (Helzberg isn’t an Ever Us dealer, but it has its own version called Exclusively Us. It’s still two-stone jewelry with the same kind of messaging.) 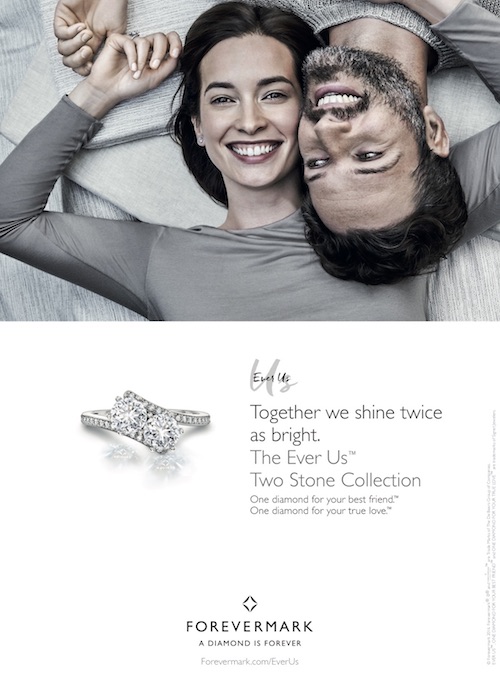 A Forevermark "Ever Us" ad from 2016. The ring style is classic and both the image of the couple and the message have remained relevant.

To be fair, Signet has had many non-product woes that competitors haven’t had to deal with. But there was a point when Kay and, to a lesser degree, Jared, had virtually filled the void for jewelry marketing for the entire industry. After De Beers pulled its funding for generic diamond advertising to focus on its own Forevermark brand, “Every Kiss Begins With Kay” and “He Got It At Jared” were almost de facto ad slogans for the industry. Both were so recognizable that I heard little kids going around singing the Kay jingle! And a few Facebook friends had happily posted pictures of jewelry gifts with “He Got It At Jared!” announcements, so surely there were more than just those. If kids are singing your jingle and happy customers are singing your praises on social media, this doesn’t sound like a company that should be struggling as much as it is just a few years later.

It was a real surprise one day a few months ago when I looked up and saw the Jared in King of Prussia, PA, had closed. The store was across the street from the largest mall in the United States and it just vanished. It left with no fanfare, no announcement, no sandwich-sign temps announcing a GOB sale. Just poof. Closed. Sign gone. Only the telltale signature architecture gives a hint of what it was.

But more perplexing is why? That store was directly across from a mall that recently completed a huge expansion, adding top-tier luxury stores like Bvlgari, Christian Louboutin, and more. A super-regional mega-mall racking up one success after another while other malls are dying and literally being knocked down. A mall whose perimeter sports new-to-market outposts of high-end or trendy dining like Eddie V’s, North Italia, and J. Alexander, and swanky home goods stores like Porcelanosa, Crate & Barrel, and Container Store. A mall that is less than a mile away from a whole new development of luxury apartments and restaurants. A mall that sits at the juncture of four major highways and draws not just from the tony Main Line but also from hundreds of miles away. This Jared was situated next to a mall that can command $700/square foot when $400/square foot is considered “healthy” for a mall. Surely if a Jared store is going to survive anywhere, it should be here?

King of Prussia also has a Zales and a Kay and a Helzberg, and until recently also had a Bailey, Banks, & Biddle. It has Tiffany and Bvlgari, Tourneau and Cartier. It has multiple department and specialty stores that offer fine jewelry. It has Pandora, Kendra Scott, Spanish jeweler Uno de 50, and Hawaiian jeweler Na Hoku. Locally-owned Milanj Jewelers is also situated in a freestanding store across from the mall.

Maybe King of Prussia has too many jewelry stores? Could be, but it’s a huge shopping mecca that gets buses every weekend and even on one of the first warm sunny days in spring when everybody theoretically would want to be outside, the mall was packed and people were not just browsing, they were shopping.

Maybe it boils down to what experiential branding expert Jelena Gregov said in a presentation at the Inhorgenta fair: the experience of buying often matters more than the product bought. Both the Kay and the Zales stores in King of Prussia look dated and utterly uninspiring from the lease line. Only the low-end Piercing Pagoda looks like it's had some attention paid to its presentation. The former Jared store in King of Prussia likewise was respectable and pleasant, but not anything out of the ordinary. Maybe Signet’s executives are looking at the wrong thing? Maybe they should focus on altering the shopping experience more than the product? Right now, what could it hurt to try?