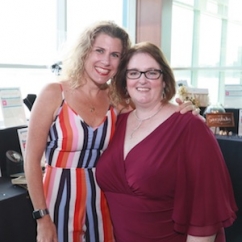 New York, NY—When the Harvey Weinstein scandal broke last fall and #MeToo became a household word, it had some ramifications in the fine jewelry industry. It also prompted some introspection in the industry and some harrowing tales of harassment.

Women comprise 90% of the jewelry-consuming public, yet huge swaths of the industry remain notoriously male-dominated. Progress has been made—and the U.S. fine jewelry industry has evolved from the days when women were barred from important social clubs and major industry functions—but throughout both the jewelry and luxury industries in general, women remain underrepresented at the top and they still encounter varying degrees of sexual harassment and discrimination. Left: Brandee Dallow, past president of the Women's Jewelry Association, and Jenny Luker, president of Platinum Guild International and current WJA president.

A white paper published earlier this year by global nonprofit BSR in conjunction with the Netherlands Ministry of Foreign Affairs and Swarovski, concluded that while more women have advanced to executive and managerial positions on the retail side of the industry, barriers remain on the supply chain side.

“Women’s roles in the jewelry supply chain are conditioned by gender inequalities (gender norms, practices, and institutions) that serve as barriers to entering and advancing within the industry. When women are present, they are typically found in informal and precarious activities or engaged in lower value and lower skilled activities, where they are not fully recognized or rewarded and are at greater risk of exploitation. In the midstream and upstream areas of the sector, [women] also often bear the greatest burden of some of the negative impacts of the industry on land, water, communities, and human health,” BSR says. 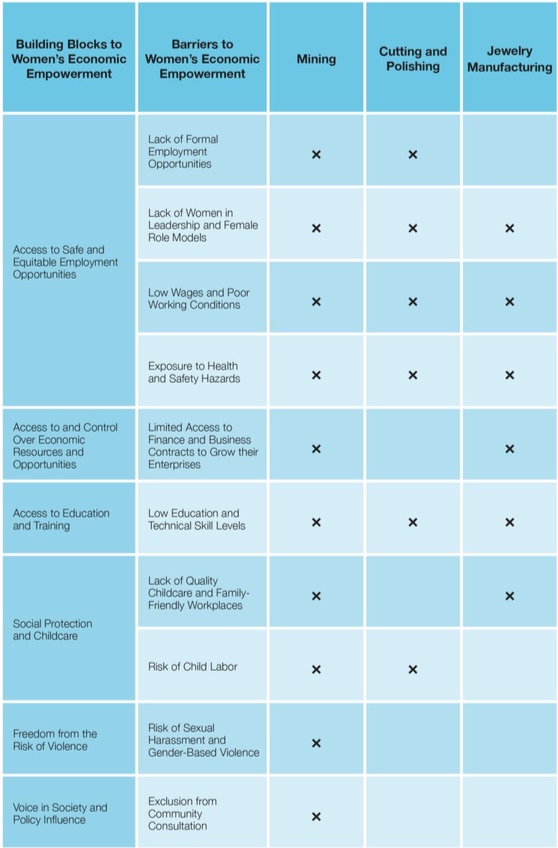 Social pressure or political correctness aside, supporting women’s empowerment is good for business growth overall, says BSR. The jewelry industry is heavily affected by changing consumer preferences, particularly among Millennial women, who are increasingly concerned about where their products come from and the social impacts they have. Jewelers are already struggling to appeal to this demographic, which is less focused on acquiring jewelry than earlier generations and far more likely to ask about the origins of diamonds, metals, and gemstones. They’re more likely to bring up questions about conflict diamonds or to favor lab-grown alternatives in the belief that they’re more beneficial to the environment or to workers.

Addressing challenges facing women in the jewelry supply chain helps drive overall improvements in the chain—which can only benefit the industry downstream. As the Financial Times’ study “The Inclusive Workplace” points out, employees and teams that are representative of their target client are 158 times more likely to understand that client. As self-purchasing women become more important to the industry’s bottom line—even for diamonds—this is a strong argument for including them in management and C-level executive roles.

Related: Forevermark To Target Women In Its 2017 Advertising Blitz

BSR says more women are breaking into mining, gem cutting, entrepreneurial roles, and the C-suite, and some large companies on the supply side—such as De Beers, Rio Tinto, and Swarovski—have made commitments to advancing women. But women still only make up 12% of management positions in large-scale mining (including diamonds, colored gems, and metals) and only 1% of C-level executive positons.

Women do play important support roles in small-scale and artisanal mining, but sadly they’re frequently exploited. For instance, BSR says women and young girls tasked with carrying sapphires from the mine to the mostly male traders in Madagascar may be pressured or forced into sex to get the best prices for their stones.

Closer to home, a panel discussion during the Initiatives In Art And Culture Gold Conference earlier this year unleashed a firestorm of controversy about women’s experiences in the industry. Moderated by Hedda Schupak, editor of The Centurion Newsletter, the panel consisted of designer Wendy Brandes, blogger Barbara Palumbo, marketing expert Brandee Dallow, and Jenny Luker, president of Platinum Guild International.

Schupak began the discussion by asking if the jewelry industry is notably worse than other industries in terms of female advancement or harassment. Andrea Hill, CEO of Hill Management Group, points out that it’s hard to know because so much of the industry is comprised of small private companies. But as a benchmark, women make up only 20.5% of industry association board members.

Panelists and women in the audience echoed the oft-repeated phrase of parents everywhere: it doesn’t matter what anyone else is doing, it matters what we’re doing. And based on the discussion that day, the jewelry industry is not doing as well as we’d like. A few of many examples: 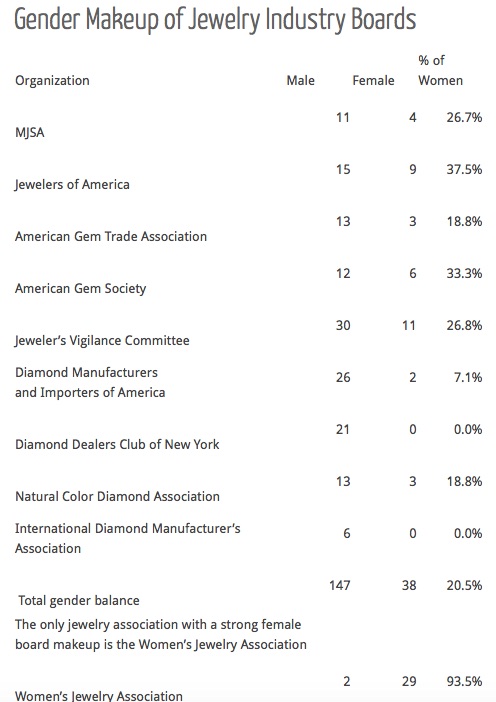 Andrea Hill’s chart of industry association boards by gender. Not included are the industry’s two main charities, Jewelers for Children and the Diamond Empowerment Fund. JFC’s board is 28% female, while the D.E.F. board, at 44% female/66% male, is the most diverse in the industry.

Separately, the Women In Luxury conference addressed the same topic. A panel of top female executives at luxury companies said the path to the C-suite is changing, but the world of luxury executives is still largely male. Like the Gold Conference, women attendees recalled vastly different experiences: some faced open hostility from male superiors, while others experienced little or no prejudice in their careers.

Progress is being made in women’s advancement but Hill says it’s not enough: the goal is fixing the problem, not merely improving it. Indeed, a study of Fortune 500 companies found more CEOs named John than total female CEOs and in the history of the Fortune 500, there have only been 64 female CEOs.

One of the biggest challenges is addressing behavior that’s discriminatory but not illegal. Demanding sex in exchange for advancement—a la Harvey Weinstein—is illegal. Tasteless jokes can also get a worker and a company into legal hot water. But more subtle forms of discrimination remain: things like asking a female staffer to fetch the coffee or take the notes for a meeting without also asking male staffers to take their turns making the coffee run or taking notes. Those are the things that subtly reinforce an inferior or servile status for women and will take longer to equalize, says Hill.

Meanwhile, WJA has launched the Gender Equality Project, driven by requests from members, chapters, and board directors. Its objective is to better understand the professional needs of women in the jewelry industry and provide them with tools and skills to help empower them throughout their careers. There are currently three areas of focus for the project:

“The Women’s Jewelry Association has always been committed to creating leadership training and opportunities that will help women improve our industry,” Mack told The Centurion, adding that the new programs focused on professional development gender-equality outreach and education are revitalizing the organization’s 35-year-old mission.

WJA also presented a series of seminars about sexual harassment, in partnership with the Jewelers' Vigilance Committee. Seminars have been held at various industry tradeshows, and also can be accessed online here.

"JVC sells an employment handbook that we recommend to businesses for best practices," said Mack.