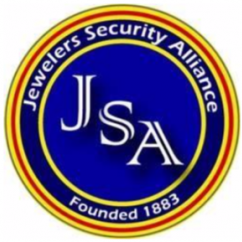 New York, NY—The number of on-premises burglaries at jewelry businesses increased a staggering 93.6%, from 327 in 2019 to 633 in 2020. These and other figures from the just-released 2020 Annual Crime Report compiled by the Jewelers Security Alliance.

2020 was an unusual year even beyond the pandemic, as JSA received reports of 323 burglary incidents involving the looting and civil unrest from May to August, totaling $14.3 million. There was also a great deal of property damage not included in that total. The total dollar losses of off-premises crimes increased from $14.5 million in 2019 to $16.1 million in 2020. In 2019 JSA received only one report of an off-premises crime of over $1 million, compared to five in 2020 with losses of over $1 million each.

JSA classifies crimes into four categories: robberies, burglaries, thefts, and off-premises. JSA defines robbery as the taking of property from a person by use of force or fear, burglary as entering premises after closing with intent to commit a crime, including hiding in a jewelry location, taking product, and breaking out after closing. Theft is defined as the taking of property without force or fear and includes crimes such as check and credit card fraud, distraction crimes, diamond switches, sneak thefts and shipping losses with evidence of criminal activity. Because the term “shoplifting” is too vague, JSA does not use it to describe events in its report. Finally, off-premises is defined as criminal attacks occurring away from the victim’s business base of operations.

Here are some highlights from the report:

The most active month for robbery was January and the least active was April. The average number of robberies per month was 17.3. 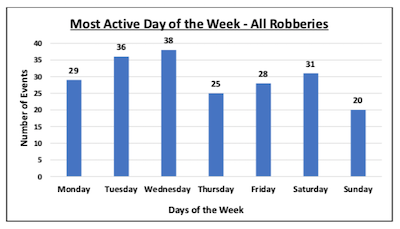 States with the most crime in 2020 were, in descending order: Illinois, California, New York, Florida, Texas, and Georgia.

Smash-and-grab robberies, however, declined from 130 in 2019 to 96 in 2020. JSA credits the decline to the work of the FBI and local law enforcement agencies that arrested a major smash and grab robbery crew.

Smash-and-grab retail robberies occurred most frequently in malls, followed by strip centers, standalone stores and, last, downtown locations. Most popular days were Wednesday, Tuesday, and Friday; least active was Thursday. Most active months were January and February; least active was April (which was the month of lockdown in 2020). Smash-and-grabs rose again in August, November, and December. 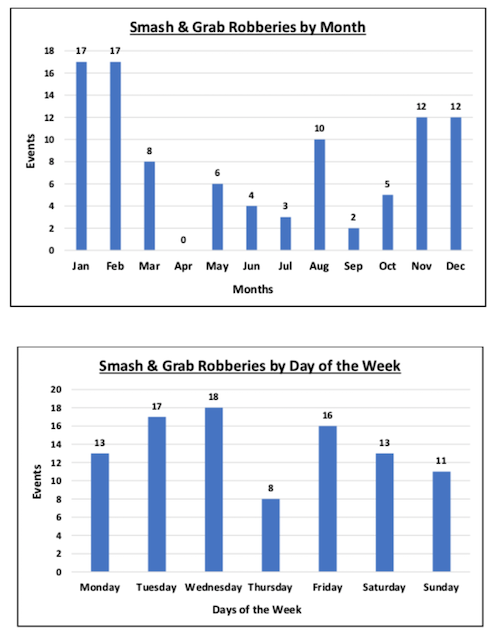 For off-premises crime, the majority were robberies and, of reported incidents, the majority occurred in parking lots or on a highway or street. Residences were the second-most frequent location of occurrence. The four states with the most off-premises losses were, in descending order, California, Florida, New York, and New Jersey. But these losses are dropping dramatically, says the report. In 1999 the U.S. diamond, jewelry and watch industry experienced 323 off-premises losses, overwhelmingly of traveling jewelry salespersons and trunk show personnel. Since then, there has been a steady decline and in 2020 JSA received just 34 reports of such crimes. 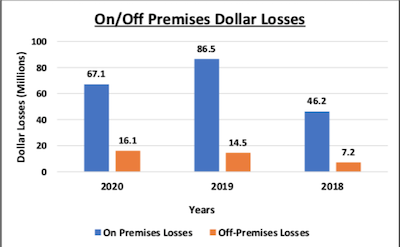 Important contributing factors in the reduction are the dedicated interest by law enforcement, particularly the FBI, in cooperation with local law enforcement agencies; the greatly reduced number of traveling jewelry salespeople on the road due to the changing methods of jewelry distribution and sales; and greater education and information sharing regarding suspects and criminal gangs by jewelry firms and police.

Next article:
Bromberg’s Gets Ready To Celebrate 186 Years In Business