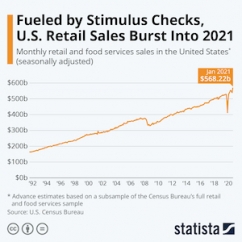 Washington, DC—Fueled by the $600 government stimulus checks, U.S. consumer spending picked up steam in January 2021. According to advance estimates published by the U.S. Census Bureau, retail and food services sales amounted to $568.2 billion in January, a 5.3% increase from December on a seasonally-adjusted basis. This puts January 2021 retail sales above January 2020 levels--although some retailers are still far off their pre-pandemic trajectory.

Still, the January figures are encouraging, especially considering that the National Retail Federation initially estimated that holiday sales would increase a maximum of 5.2%. The actual total was 8.3%, significantly higher than NRF’s predictions and more than double the gains of recent pre-pandemic years. Better jewelers, of course, had their best year ever in 2020, with the majority of respondents to The Centurion's annual Sales Success Index besting their already-record-setting 2019 totals by 10% or more.

As this chart from Statista.com shows, retail sales rarely drop significantly. Prior to spring 2020 when the initial pandemic lockdowns occurred and retail sales fell a combined 22.9% for March and April, the biggest drop in retail sales occurred in November 2008 at the height of the financial crisis—and that was still less than 4%. In other recessions, such as the dot-com meltdown of 2001-2002, retail sales did not dip significantly.

Next article:
New Podcast from EuropaStar “The Watch Files”