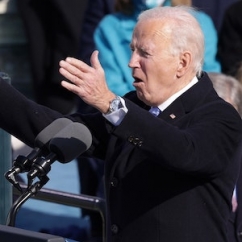 Washington, DC—“Not for nothing is Rolex’s storied gold Day-Date model known as the ‘President,’” says a recent article in the New York Times. After all, American presidents from Dwight Eisenhower to Lyndon Johnson to Ronald Reagan to Donald Trump have worn them. John F. Kennedy had one also, but his was a gift from Marilyn Monroe that never saw the light of day until it was auctioned off in 2005. Image: President Joe Biden's new Rolex Datejust is visible as he gives his inauguration speech on January 20.

There’s clear evidence that President Joe Biden likes watches. But where on the watch-collecting scale does President Biden fit? Does he have a bona-fide watch collection or just a nice watch wardrobe?

Two writers recently attempted to quantify this. Nancy Olson, who in an article in Forbes, said she “asked Tim Stracke, CEO and founder of Chrono24, an e-commerce watch platform, who has kept an interested eye on Biden’s wrist over the years. He estimates Biden’s watch assortment at around ten timepieces, which pushes him clearly into the ‘interested’ camp, but not necessarily into the realm of geek-dom.”

Meanwhile, Alex Williams, a writer for the Men’s Style section of The New York Times, identified the bulk of Biden’s visible watch collection as entry level models from high-end brands, with price points roughly between $5,000 and $7,000. Not the inexpensive timepieces Obama, Clinton, and Bush favored, but also nowhere near the stratospheric realm of what luxury watch collectors routinely pay for a coveted model.

“How centrist of him,” Williams joked in the article.

Biden was already well-known for his love of both the Omega Seamaster and Speedmaster models, and owns several of each that he wears regularly, says Olson in Forbes. But he’s also been spotted wearing mid-priced brands like Seiko, Tissot, and an Apple Watch, and a Vulcain Cricket, a watch given to every U.S. president since Harry Truman. Biden received one in 2011 when he was vice-president.

What did he wear for his inauguration on January 20? In true Biden fashion, he reverted to presidential tradition with a Rolex—but opted for the brand’s (relatively) modest entry-level stainless-steel Datejust model, says GQ magazine. 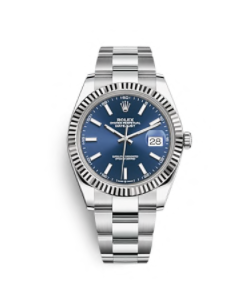 This blue-dial Rolex stainless Datejust is similar to the one President Joe Biden wore on Inauguration Day.

Next article:
More Light At The End of The Tunnel? January Retail Sales Leap Astounding 5.3%