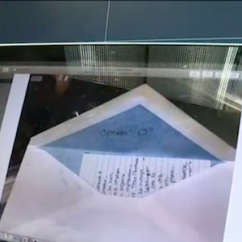 Houston, TX—A dozen letters containing a white powder have been arriving at a Houston area jewelry store for almost two weeks, repeatedly bringing out the hazmat response team of the Houston Fire Department to investigate.

The letters, which all came from the same sender and have a return address of Redding, CA, have been sent to Houston Jewelry & Fine Gifts, a high-end store in the southwest portion of the city. The letters are handwritten on spiral notebook paper and contain requests for cash and rambling complaints about a host of problems, but none directly concerning the store.

“We don’t know why they’re reaching out to us. There’s no connection to us whatsoever,” owner Rex Solomon told KPRC TV-2.

When the first letter arrived, Jean Robingston, a secretary at the store, was the one who opened it. She told KPRC that she knew the substance wasn’t anthrax, a deadly poison, but that it contained “white crystals” and she immediately isolated it. It was later determined that the first letter, at least, contained laundry detergent; it was not known at press time whether all the letters contained the same detergent.

The FBI, along with U.S. Postal Service inspectors and Houston police and fire departments, are investigating. 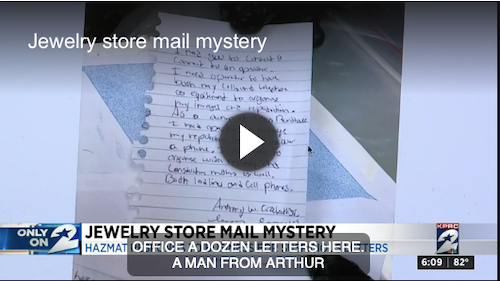