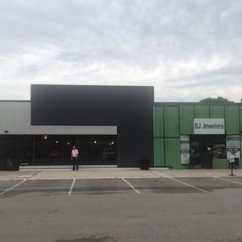 Rochester, MN—When a new restaurant wanted to use the space that SJ Jewelers was occupying, the jeweler saw a golden opportunity—pun intended—to grow. Image: Jeweler Scott Johnson standing in front of his store's new space while it was still under construction.

The jeweler, located in Rochester, MN’s Miracle Mile Shopping Center, moved its store operations literally by 30 feet—so little that it was even able to keep its same mailing address, says this article in the Post Bulletin. But that slight move allowed the jeweler—voted Rochester’s favorite in 2019—to grow from 878 square feet to 2,100 square feet, almost two and a half times its former size.

Owner Scott Johnson, who opened the store in 1985, told the paper, “It’s bigger and better. It’s a really modern look. It’s a good look for us.” He also added two additional employees, bringing his total team to five, and the space is allowing him to add more displays of both bridal and fashion jewelry, bolstering the repair and custom work that is the backbone of the store’s business, says the paper.