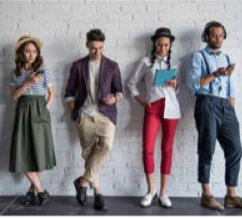 London, UK—It’s already an established fact that older and younger generations view luxury differently. For older generations, luxury equalled formality: the good dishes were used for special occasions, fine jewelry was reserved for dressing up, and nobody but the hostess ventured into the kitchen. Younger generations pair diamonds with jeans, favour open-concept kitchens, and even vintage Eames chairs need to withstand kids and pets.

That’s not the only difference. New research published in De Beers Group’s latest Diamond Insight ‘Flash’ Report shows that for younger generations, ethics and sustainability are the number-one most important consideration for purchasing luxury goods, surpassing quality, which is the top consideration for consumers age 50 and above.

Furthermore, younger generations value ethics and sustainability assurances beyond simply knowing where a product originated—and they’re willing to pay more for it. They’re also poised to take over the lion’s share of spending. In 2019, Millennials and Gen-Z accounted for 39% of consumption, but accounted for all growth in the marketplace. Millennials are expected to make up 45% by 2025, and by 2035, Gen-Z will likely account for 40% of all spending. Additionally, the trend will impact Boomers and Gen-X who, although slowly aging out of the market for luxury goods, still are a significant factor in spending. These cohorts, who themselves moved away from the previous generation’s hierarchical, dictatorial parenting methods are also likely to be supportive of—and potentially influenced by—their young adult children’s belief systems and values.

The trend that started in our industry with conflict diamonds is here to stay.

Based on research conducted among 1,000 U.S. consumers by De Beers in conjunction with 360 Market Research, the report found that older consumers tied provenance to quality (for example, French champagne, Italian cashmere), the 18-to-34 age cohort overindexed on factors such as human rights, environmental impact, and “from a company whose values I agree with.” Put in practical terms, where an older consumer might associate “Persian” with the best quality rugs, a younger consumer wants assurance that no child labor went into making that rug. This translates into associating self-worth and status with showing the world you care, vs. simply showing the world you have taste and money. Indeed, Harvard Business Review says products marketed as sustainable are growing at a rate almost six times that of other products.

Not surprisingly, affluent consumers (HHI >$150K) are the most likely to pay a premium (73%), but almost two-thirds (64%) of all consumers said they were willing to pay more for a product if its place of origin mattered to them.

Additional research from global consultancy Bain backs up the De Beers findings. Bain found six in 10 luxury customers—especially Millennials—believe luxury brands should be even more engaged in sustainability and social responsibility than other industries. “On a basic level, global consumption has grown massively while many of the world’s resources remain fixed and finite, or only partially renewable,” says Bain. Diamonds are a precise example: gem quality stones are becoming increasingly difficult and expensive to find, while miners increasingly must demonstrate commitment to socially and environmentally responsible mining.

While provenance matters most in essential health and safety products (i.e. food, cars, skin care), more than one third of respondents said they care a lot about provenance of discretionary and luxury goods and, specifically, diamonds.

Bruce Cleaver, CEO, De Beers Group, said: “It’s clear from this research that while provenance remains of high importance to luxury consumers, the meaning associated with provenance is shifting. Younger generations want assurance of the positive impact a product has created beyond simply knowing where it originated. This is creating a new status in luxury, where consumers want to show the world they care through their luxury purchases and are increasingly prepared to pay a premium to do so.”