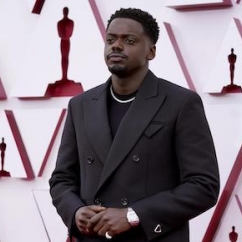 Los Angeles, CA—It goes without saying that the 93rd Academy Awards were an unusual ceremony in an unusual year, which means it should be no surprise that the biggest jewelry news of the night was centered on the men. (Image: Daniel Kaluuya in a Cartier diamond rivière necklace AP Photo/Chris Pizzello, Pool)

The intimate, greatly-scaled back event was held at Los Angeles’s Union Station, rather than the traditional Dolby Theater. The setting was more reminiscent of a 1930’s supper club than the over-the-top extravaganzas we’ve come to expect, replete with surprise pizza deliveries and other gimmicks. But it still represented a step back towards normalcy after a year of awards-by-Zoom. At the same time, a post-event Wall Street Journal article's headline proclaimed "Oscars Ratings Fall 58% to Event’s Lowest TV Viewership on Record," indicating a waning interest level among consumers as just 9.85 million viewers tuned in. Social media was of course active in spreading word about the event as and after it happened.

See below for details on the jewelry at the 2021 Oscars, including coverage of popular jewelry brands Kwiat, Fred Leighton, Le Vian and Rahaminov for Forevermark.

The red carpet reflected hope and optimism in both the level of diversity in nominees and winners—notable given how the Academy has been criticized for lack of it in the past—and in the female celebrities’ choices of gowns. Brilliant reds, golds, and whites dominated, along with massive sweeping skirts and trains that would do any fairytale princess proud. Gowns veered from modestly covered (some might say protectively swathed), such director Chloe Zhao’s from Hermès, Glenn Close’s royal blue Armani caftan, or presenter and nominee Laura Dern’s long-sleeved black top and white feather skirt confection, which she accented with bracelet, ring, and earrings from Pomellato and a diamond-encrusted pair of shoes. 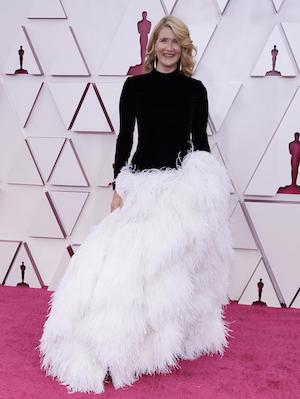 But for every action, there’s an equal and opposite reaction, and that was seen in the many bare midriffs, such as Zendaya, who wore more than 183 carats of Bvlgari diamonds set in platinum with her Day-Glo yellow gown; Andra Day, who accented her metallic gold gown with yellow diamond earrings from Tiffany; and Carey Mulligan who also went gold with a bare midriff. 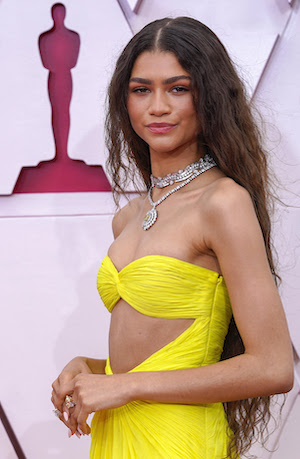 Zendaya wore more than $6 million worth of Bvlgari yellow and white diamond jewelry set in platinum.

With all the red dresses, it’s no surprise that rubies were on display as well, such as Angela Bassett’s Chopard earrings (AP Photo/Chris Pizzello, Pool): 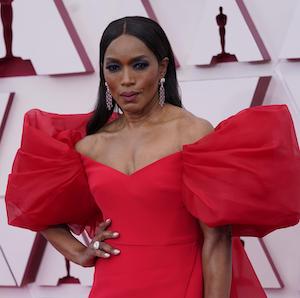 And there were, of course, lots of diamonds, including all the usual major houses but also some jewelry-store favorites, such as Viola Davis, Regina King, and Amanda Seyfried in Forevermark and Glenn Close in Kwiat and Fred Leighton. But the biggest jewelry news of the night wasn’t about chandelier vs. matchstick or stud earrings, or diamonds vs. color. It was the men in attendance decked out in the kind of jewelry normally seen on their female counterparts. For instance, Daniel Kaluuya (top of page), who won Best Supporting Actor for his role in Judas and The Black Messiah, wore a Cartier diamond rivière necklace with his black-on-black tuxedo, along with a massive diamond ring on his left pinky.

Director Travon Free (Two Distant Strangers), meanwhile, used his moment to make a political statement, with his gold and black Dolce & Gabbana tuxedo lined in the names of all the individuals who were recently killed by police in the United States.The inside lining of Free’s jacket listed the names of Eric Garner, Duante Wright, Alton Sterling, Philando Castile, and Tamir Rice, and 17 others, while his sneakers paid tribute to George Floyd, Breonna Taylor, and others. His co-director Martin Desmond Roe who wore a similar suit, and both wore custom-made Dolce & Gabbana lapel pins honoring the late Kobe Bryant. 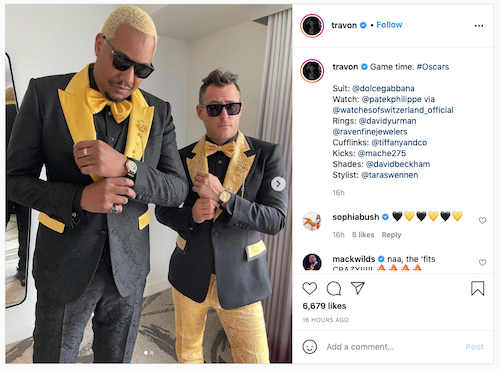 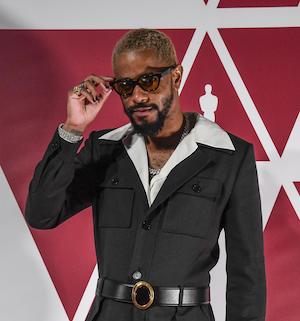 Gender-free jewelry was highlighted as one of the top five trends in the recent Natural Diamond Council trend report. This makes twice—and you know what they say about three times makes a trend. Another NDC-identified trend was heavy metal chains with diamonds, as seen on Andra Day: 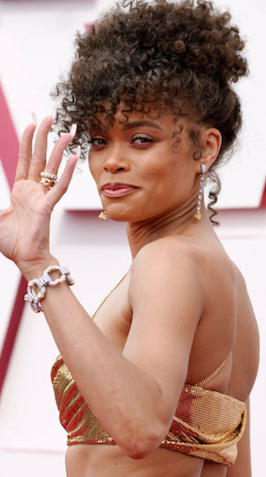 Here is more jewelry by names you know: 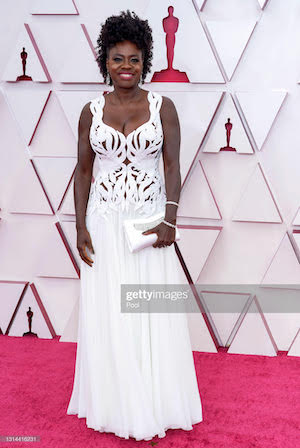 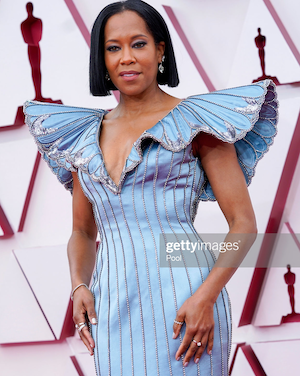 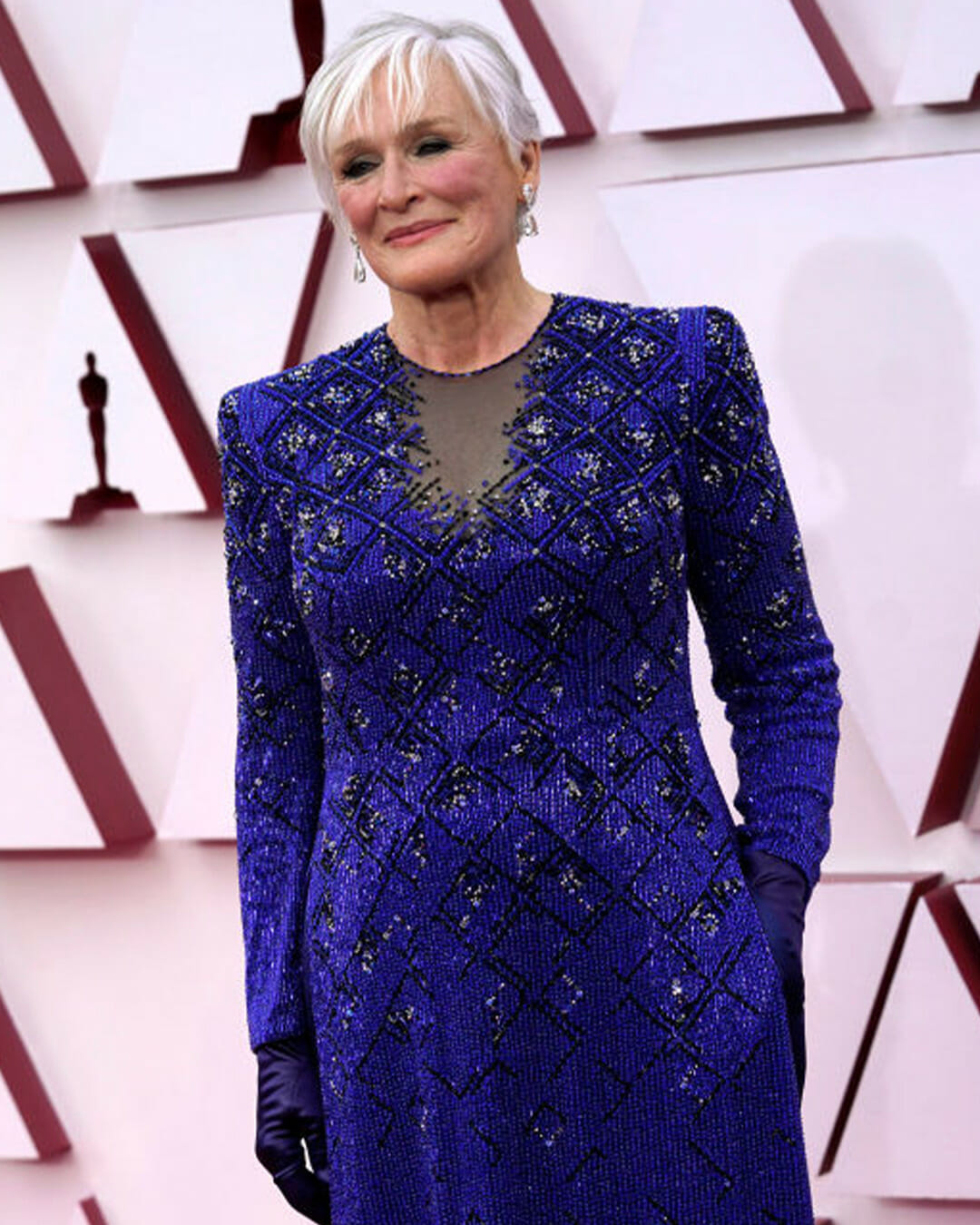 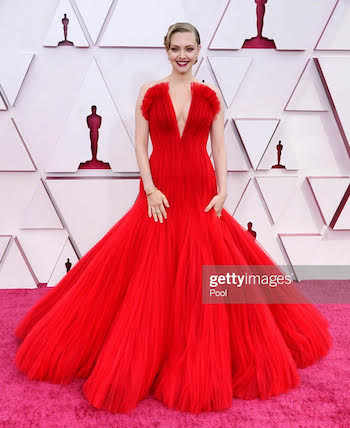 Five celebrities opted to wear Le Vian jewelry for the evening, including E! reporter and personality Giuliana Rancic (below), a noted fan of the brand. She wore a ring from the new Sunny Yellow Diamond Collection, which launches April 28 at Jared The Galleria jewelry stores nationwide.

''I am thrilled to see so many notable individuals chose Le Vian jewelry for the 93rd Oscars, especially given we have a policy of not paying or gifting celebrities," said CEO Eddie Le Vian. "In particular, we are thrilled Giuliana Rancic chose to wear our new Sunny Yellow Diamonds® collection, with an exclusive collection available at Jared The Galleria from 28 April. Le Vian’s dream of democratizing the world of natural fancy color diamonds, once the exclusive domain of ultra-high net worth individuals, has inspired Le Vian to deliver this new collection. The comfort fit of these pieces specially designed for everyday wear and the intricate handcrafted settings belong to our High Jewelry collection, but the prices starting at $1,999 are unheard of for original designed certified stones of this make and quality. As we emerge from the pandemic, how better to keep us in a cheerful disposition than with glorious jewels set with striking yellow diamonds?” 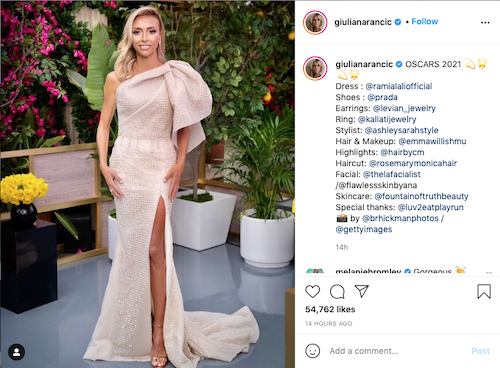 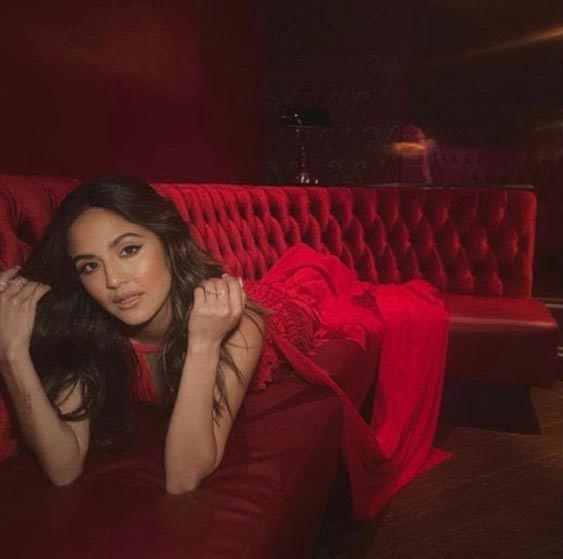 Also in Le Vian for one of the afterparties were Sara Sampaio (below, left) and Jasmine Tookes (below, right)  wearing Le Vian necklace and earrings, respectively. Both are models and Victoria's Secret Angels. 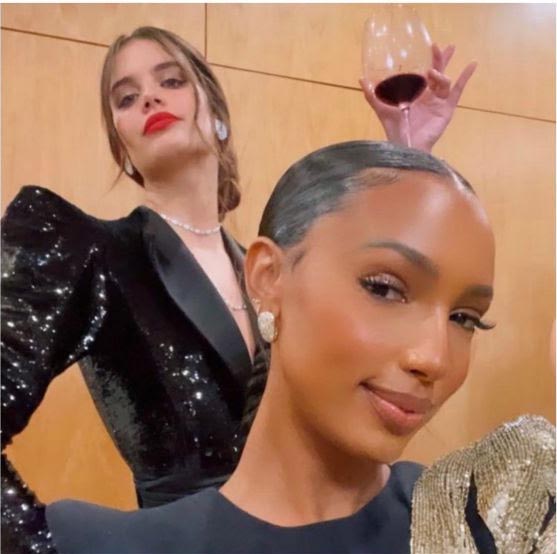 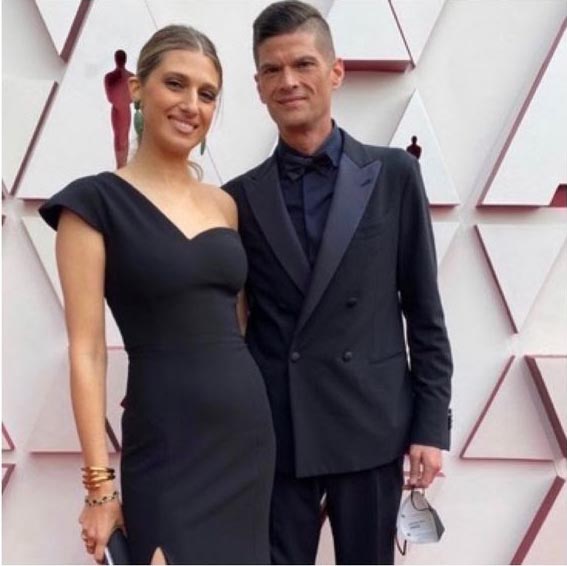